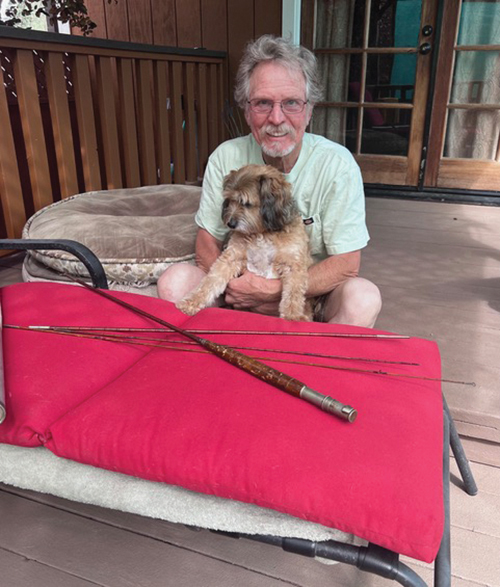 Fifteen years ago, one of my first small business stories for the Bay News was about Patrick Bietz and Suzanne Maury, owners of Top Dog Coffee Bar. As of July 26, Dustin Blom became the new owner.

A private gathering of longtime patrons and past employees was recently held to introduce Dustin. He announced that he intends to build on the quality products and services, plus continue the advocacy programs, that have defined Top Dog Coffee and Rescue-Me-Coffee.

Pat and Suzanne have become dear friends, but then the duo have never meet a stranger most likely because Pat has that coveted storytelling gene. I was barely a cub newspaper reporter during that first interview and will be forever grateful that he taught me it was the backstory behind the business ownership that was equally, if not more, important than the products offered. I realized success, to me, for future assignments would be to discover and reveal something my readers might never know unless they read my story.

For example, did you know Pat had given up living large in the Hollywood film industry after meeting Suzanne? But before they reinvented themselves, he had edited sound tracks for more than 70 films, was nominated for best editor for “The Fugitive (1994),” was well known in the industry for his work on “The Fan,” “Eraser,” “Tommy Boy” and my favorite ‘romcom,’ “Up Close & Personal.” I never thought to ask if editing “Bengi: Off the Leash” might have been when he realized he wanted to advocate for rescue dogs.

Suzanne was an in-demand massage therapist in Santa Barbara, who was often recruited to take care of Hollywood talent. It’s how the couple met, but not the life for them. Like Dustin, Pat had a dream to learn the boutique coffee business. They purchased SLO County ranch-land and chose Morro Bay to build their coffee business. Pat “trained with one of Saucelito’s best roasters.” His goal was to offer the best tasting coffee sourced worldwide from smaller growers and serve unique menu items in an atmosphere relaxed enough to talk business or dog-friendly enough to casually gather with friends in their garden setting.

Once that dream was fulfilled his next dream was to expand business to a premier coffee subscription program that would benefit a cause for rescue dogs. A K9 graduation at California Men’s Colony fueled that passion and purpose. Rescue-Me-Coffee was born as the couple left the barbed-wire gates of the prison where they had witnessed a K9 training program that offered life-altering healing for incarcerated men, veterans and first responders.

Check out the Rescue-Me-Coffee video created by Pat that loops all day at Top Dog while the barista is preparing patrons’ orders.

In March of 2020, Pat and Suzanne thought they had to close shop, but then barista Mike Nelson, who they had met at that K9 graduation, later hired and encouraged him to create www.second-chance-dog-training.com, suggested they stay open until the inventory Suzanne had just purchased was gone. The couple was overwhelmed by loyal customers who planned to be there daily if necessary to keep them in business.

On one of those visits Pat said he had a story for me. Once told, we knew I’d have to hold it until there was an ending. That conclusion happened when Dustin, a seasoned SLO and Santa Barbara paramedic, officially earned his coffee roasting training badge from Pat and coffee bar operations apron from Suzanne on escrow closing day, July 26.

The following is the story how the universe determined Top Dog Coffee Bar’s future. On a day like any other day, Pat was taking care of business — schmoozing with customers, remodeling another area of the garden, fixing the plumbing, standing in for the barista, etc. etc. etc.— when a customer stopped and complimented his customer service.

“You race around here nonstop. You’re smiling and friendly to everyone. Such a good attitude you project to all around here. Might I ask how old you are?” Pat told him 74.

“Have you ever thought about selling this place and retiring?” Pat told him no because there was too much still to do.

The customer, called Steve, looked into Pat’s heart and asked, “If you did sell and were not burdened by your restaurant what would you really want to be doing?”

Pat thought hard and answered, “Hmmm! When I was between films I’d go to Montana, put my waders on and go fishing. Most zen thing I ever did. I’d like a life with fishing in it again.”

Steve said, “You need to do it.” Pat heard what Steve wasn’t saying, “before you wear out.”

A couple days later Steve came back with his 15-year-old daughter and wife and pulled Pat aside, “My daughter is so bothered by COVID She doesn’t hear me that the world will get better. You have such a good attitude. Might I ask you to talk to her and spread some of your cheer?”

A no-brainer request! Pat is always willing to talk to people about living the good life. He told her, “You are a teen and everything is so important and huge at your age, I understand. I was there once, but believe me, this will pass and you won’t even remember most of what is bothering you today. In fact, you might have bragging rights to tell your children how you lived through the year of COVID-2020 and survived the great worldwide pandemic.”

Steve thanked him and was confident Pat’s words would help his daughter. He asked Pat’s address. “No, no, this was done from the heart,” Pat said. Steve insisted.

About three weeks later, Pat was roasting coffee at the ranch like he did every night so Top Dog’s Rescue-Me-Coffee was always fresh. A rare delivery came to the ranch instead of the shop. “Suze, did we order something I forgot I ordered?” She was stumped, too.

Then he noticed Steve’s name and opened the package and almost fell over when he lifted out a 1920s custom fly fishing rod and reel. Steve had included his phone number.

Pat called and said, “Steve, I’m overwhelmed. This had to cost upwards $3,000. It’s beautiful. I love it. I have to know its story though.”

Steve revealed, “I’m an art dealer and long ago I traded for several of these. I saved the best and hung it up on the fireplace mantle. My wife and I would look at it and remind each other that someday we would find its proper owner. After you talked to my daughter, we knew we had found its owner. I hope you will make room in your life to go fishing.”

Pat and Suzanne had a long talk that night and agreed it was time to move forward. After sleeping on it, they listed Top Dog Coffee for sale, proceeded to purchase their future ranch in Idaho, site-unseen, and soon after the universe sent them Dustin, who told them he’d also had a dream to own a coffee roasting business and had researched the entire area and found Top Dog the best around. Both were destined to move forward with their next lives.

So a postscript for customer Steve! As of July 26, 2022, Pat and Suzanne have officially gone fishing! Morro Bay’s loss will leave a big hole in our collective community hearts, but at the same time we wish them peace, health and joy during their next life’s chapter.