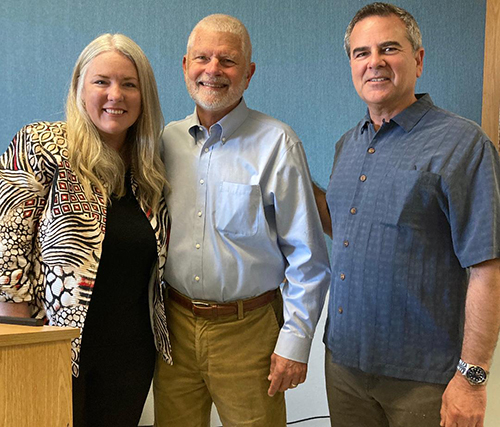 At the height of the March 4 festivities during the Morro Bay Chamber of Commerce Annual Awards Gala, one could feel a boisterous community buzz, “Morro Bay 2022: Back & Better Than Ever.”

The evening was dedicated to the memory of Councilman Robert “Red” Davis. A standing ovation recognized his contributions followed by a celebration of a community that is moving forward, proud to honor representatives that modeled the City’s true and eclectic character: Police Chief Jody Cox, Carole Truesdale, the Morro Bay Lions Club, and Coalesce Book Store & Wedding Chapel.

Just thirteen days later, the Morro Bay Chamber of Commerce kicked off their inaugural “Breakfast on the Bay” to another standing-room-only gathering of business representatives and chamber supporters from the Estero Bay and SLO County. The crowd came prepared to network their business, advocate a common cause, and announce future happenings. Again, the community buzz was evident, “Morro Bay 2022: Back & Better Than Ever!”

CEO Erica Crawford welcomed all to the first monthly breakfast scheduled every third Wednesday in 2022. She credited Castle Wind and VISTRA Energy for their generous sponsorship funding the Chamber’s newest program – one she and current and former board presidents, Jeff Eckles and Steve Peck, had been planning for over a year. The agenda and venue will be consistent, while the theme and presenters will change.

Crawford hopes attendees “…will discover Estero Bay news here first, rub elbows with friends and new associates, and break down silos by discovering alternative opinions and options for action.” Who is encouraged to attend? She invites, “…a variety of thought-leaders and community builders to coalesce under the chamber’s big tent.”

Expect breakfast and networking to open each gathering at 7:30 a.m. Be assured the quality of sweet and savory treats will remain. This month breakfast was provided by Bottle Liquor, Buttercup Bakery and SLO Roasted Coffee. Reservations for the April 20 breakfast or the entire series is open at www.morrobaychamber.org/events.

Jen Ford launched agenda item #1, the first of four Open Mic Small Business Introductions. Since March recognizes Women’s History Month, the presenters appropriately modeled women-owned small businesses. Besides serving as a Morro Bay City Councilwoman, Ford’s primary day-job is co-owning and operating Rock Harbor Marketing with her husband, Travis. She is also a co-founder of the SLO Women’s March. She challenged the attendees to consider viewing each other and our “universe” with a broader lens as life continues to swirl and adjust to a new-normal.

Supervisor Bruce Gibson was pleased to announce that as of Tuesday, March 15, he and fellow board members had unanimously agreed on funding amounts for grants using American Rescue Plan Act funds in order to “…make a difference for our County’s hard working small businesses.” Apply at: https://www.slocounty.ca.gov/Departments/Administrative-Office/Featured-News/2022/Applications-Open-for-Business-Grants-Due-to-COVID.aspx.  He also indicated the board was close to funding grants for child-care providers and facilities, a business sector so needed and very close to his heart.

Noting recent redistricting changes that had removed him from representing the Estero Bay, he said, “I will always be available to the citizens of the Estero Bay. I live just up the road and began my first campaigning in Morro Bay. Call anytime you need me.”

Small Business Open Mic #2 introduced a gutsy Lisa Babb. She and husband Jeff opened Central Coast Cart Rentals on North Main Street because they enjoyed run-abouts around Morro Bay. Visitors thought they had rented their golf cart and wondered where to get one. They leaped into the business when the North Main auto lot closed. The property had previously offered propane tanks fill-ups. “Why not since the equipment was there,” said Lisa. However, since Jeff worked in the Valley two days a week, Lisa had to learn to fill the tanks. After a backbreaking first day providing the service, she questioned her stamina, but she was back at it the next day. A customer made it all worthwhile. He asked Jeff if it had been his wife pumping the propane the day before. When the answer was yes, the impressed customer said, “You have my business for life!”

Open Mic #3 was Sierra Mace and Summer Birchell, the mother-daughter team that own and operate Gaia’s Garden offering crystals, houseplants and meditative classes. The business recently moved to Main Street behind the Ugly Mug and Legends – both small businesses also owned by women.

Morro Bay Mayor John Headding offered good news and bad news in a brief State of the Bay, “Morro Bay was in budget crisis before the pandemic and with quick action by the best city manager in the county (Scott Collins), our city not only survived the crisis but came through better than before. Morro Bay is in the strongest financial position it’s been in years thanks to citizen support for Measure Q and E.

“The bad news, however, is the Harbor Enterprise Fund needs our attention due to insufficient funding for generations and needed harbor repairs incurring long term capital expenditures we don’t have.” He noted there was a parcel tax initiative created by a citizens’ group currently seeking signatures to place the issue on the next ballot.

Mayor Headding also applauded an infusion of new business start-ups due to the partnership between the city and the chamber. He also stressed the water reclamation project would secure the city’s future water needs with federal loan paybacks at minimal interest costs. “Ok, you’d rather hear when street construction will finally be finished!” He closed with a shrug and a smile. “Well, I’m not really sure, maybe within four to six weeks?”

Open Mic #4 brought up Savory Palette co-owners, Nancy Herrmann and Tammy Cline. They purchased the business, 601 Embarcadero below Windows on the Water, just before the pandemic shuttered them. They survived and continue to build a following offering fine wines, craft beers, tapas and a variety of musical programs, including participation ukulele and open mic nights, plus touring and local musical entertainment on Saturday evenings.

So, what’s next for the Morro Bay Chamber? This edition of EBN will not be out until the day after the second Embarcadero installment of Shop, Sip & Stroll first offered and enjoyed last spring, but there is definitely time to get your pass and glass for Morro Bay’s Downtown edition April 3, 5-8 p.m. Register at www.morrobaychamber.org/events. Morro Bay business merchants will not only be open for your business, but offering good cheer, plus eats and treats by local eateries and adult-beverage providers.

So if I wrote it once, I’ll shout it out one more time, The new normal buzz from the community about recent efforts produced by the Morro Bay Chamber of Commerce is “Morro Bay 2022: Back & Better Than Ever.”