Sheriff’s Use Virtual Reality for Training 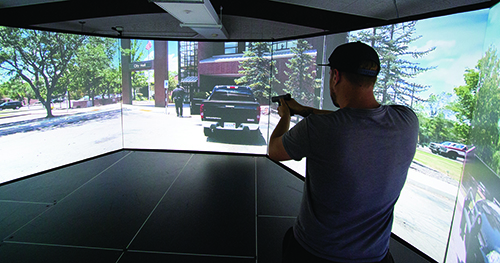 A distraught mother flags down a patrol officer and says that her husband took their baby and is threatening to harm the infant. When the officer arrives on the scene, the man is outside his vehicle on a bridge with the baby in one hand, a gun in the other.

The outcome of the increasingly escalating situation depends on split-second decisions by the officer and how they respond to the actions and reactions of the father. The safety of the baby must remain the focus of attention — verbal de-escalation is the goal, but deadly force could be the reality.

The tension, adrenalin and cognitive stimulation are high, however the suspects are actors, the officer is on a stage and the crime scenario is a teaching and training simulator used by the San Luis Obispo County Sherriff’s Department.

“It’s like a video game on steroids,” said Sheriff’s spokesperson Tony Cipolla. “It’s just very immersive in terms of training and very realistic. It really puts you in the scenario.”

It is a hexagon shaped platform with a 300-degree viewing surface allowing the trainee to move in the direction of the victims and criminals. Behind each of the five screens is a projector and speaker system. Each scenario involves actors, not animated or computer generated characters, that detail everything from the smallest pre-attack indicators to the chaos of screams, gunfire, victims fleeing and suspects threatening — all in real time.

Added to the reality, an instructor sitting at a table with two monitors and a keyboard controls the system and has the opportunity to change the direction of how the situation plays out based on the interchange of dialogue, actions, and reactions between the trainee and the actor on screen.

“It is an additional tool that we use to train in a safe environment,” said Range Master and Sheriff’s Armorer Ian McKnight, who instructs law enforcement personnel and concealed carry weapons permit holders. “It is a force options, decision making training tool. So it’s not a shooting simulator per se; it’s designed to get officers and deputies to think, ‘What can I do? What can’t I do? What should I do? What I shouldn’t do?’ The good part about this system is that the officers and deputies can actually make a mistake that could be potentially lethal out on the street and learn from that decision making process.”

The training is part of the perishable skills program — a post-certified course.

“Every year, the deputies go through a four-hour, perishable skills training on a lot of different things,” McKnight said, “firearms, empty handed, baton, arrest and control, Virtua and force options.”

When the lights surrounding the VirTra V-300 arena go dark, the call is dispatched over the radio, up to three trainees are faced with uncertain and rapidly evolving situations. Criminals, victims, gunshots, and information exchange come from all directions keeping the reality factor high. The floor even vibrates during a scenario that involves a helicopter.

The guns used, rifles and handguns, are real but they have been converted to run off of CO2.

“It gives a real good idea of what it would feel like if they were shooting live rounds,” McKnight said.

A Taser and pepper spray are also included in the arsenal. The trainee can be “shot” in which they receive a low electrical jolt from an apparatus worn around the belt that is controlled by the computer operator. McKnight said it is similar to being shot with a heavy rubber band.

“It’s a huge discretionary thing that the operator has to see,” McKnight said. If the student, for some reason, is in the line of fire and they don’t make any attempt to move, then we’re going to hit [the button]. But if they move, at least their brain is thinking about it. It may not be the perfect movement, but they’re thinking about moving.”

After each scenario, the instructor can immediately “debrief” the trainee replaying the incident in slow motion and discussing the thought process behind each action, when the weapon was seen, how many shots were fired, and where the suspect was shot. Ultimately, the information leads to areas of training that need to be focused on.

“Sometimes they get caught up and they do something that’s questionable, that we would not have done,” McKnight said adding after discussion the trainee is run through it again. “Observation skills and learning how to react quickly and correctly is one of the major results of this.”

The VirTra V-300 became a standard part of training about six years ago when the Sheriff’s Office purchased the $450,000 system with a Homeland Security grant. They recently upgraded the package to a lease-based one that provides continued maintenance as well as new scenarios with an emphasis on reducing the intensity of the conflict as well as responding to a mental health crisis.

“What’s really important about that is the fact that it has a lot of de-escalation built into it,” Cipolla said. “The scenarios are really trying to get away from where you automatically draw a weapon towards escalation techniques that you can use. Each scenario has multiple ways that it can go, from non-lethal to Taser then to lethal force. “

Estero Bay News’ Ryan Sullivan, a civilian, participated in a few scenarios. McKnight operated the computer deciding how the crime would unfold.

“This is incredible,” Sullivan said during his debriefing. “It is more serious than just a visual; it teaches you that not shooting is more important. It really makes you think about how you would really react just because you have a gun. Training is so important and this is an amazing tool.”

The system and upgrades are further reaching than the Sherriff’s Office; members of the FBI, the SLO District Attorney’s Office and law enforcement agencies throughout the county have used the training.

In case readers are wondering, in the scenario with the father and his baby, if the trainee fails to calm the man down and then misses the split-second opportunity to fire a clear shot, the subject, with the child, peels out in his truck with tires squealing and dust flying.