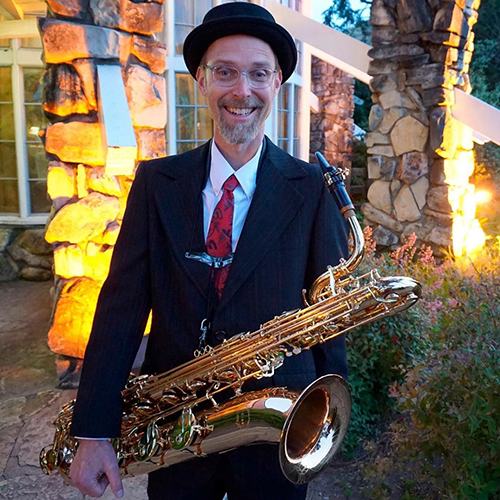 Local musician and teacher Ron McCarley is holding on to his music in challenging times.

San Luis Obispo County’s music scene is vibrant! Or will be again post-COVID. Most events, restaurants and coffee bars, wineries, taverns, concert halls, religious services, even training sessions at our music stores and at all levels of education venues include live music. Musicians, will you be ready to find your group, a career, a retirement gig or even a side-hustle to share your music live? Training and networking with area musicians might be your entry to landing yourself a local gig.

Many local musicians have trained at Cuesta College. Ron McCarley is the director of jazz studies at Cuesta College. He said, “Cuesta started Tuesday (January 17), but it’s still a great time to jump in! My big band (Ron McCarley Jazz Quartet) is usually about 20 people and each combo is about six people, we usually have at least five of those. My other classes range 10-25 people. Josh Collins, Kevin Garin, Stan Loken, James Gallardo, just to name a few, are some students to go on to very cool music careers and I have many students who continue to play music, but have moved to something else for their careers.”

McCarley was inspired and mentored by a music teacher. “My high school (Dos Palos High School) had a very strong jazz program under the direction of Isaac Jenkins. He believed in me and gave me so many solos and so much encouragement. It was then that music really became important to me. He was a special teacher and many of his students have stories like that.”

But McCarley understood he needed to be his own advocate to grow as a musician. He expanded his education and practice time beyond the classroom. “An important gig I got was playing at the Palace Grill in Santa Barbara. I played there every weekend for 10 years. Having a ‘regular’ gig was so important for me to keep learning and to see myself as a musician.”

He continued to study and then teach at Santa Barbara Community and Westmont colleges, but it was coordination of “street players” that built his network and public experience. “Another important gig for me was playing at the Paseo Nuevo Mall in Santa Barbara for a few years.  I would wait until a few days before the gig and then call all the best musicians I could find to play with me. The gig didn’t pay well, but if I didn’t call too early, people would do it if they didn’t have something else. I was the worst guy in the band every Saturday, but I learned so much playing with those guys.”

Being present and out there playing with others paved the way to playing some big events, “…like the Hollywood Bowl, recording at Capital Records and for great musicians at the PAC (Cal Poly’s Performing Arts Center).”

However, McCarley realized life sometimes requires a re-set of priorities. Today he balances his time with his wife, Laura and six children living near Morro Bay, teaching, performing with his band and others, plus operating his instrument rental and repair business, Ron’s Music Studio. Contact ron@ccflutes.com.

“We came to SLO when I got the job at Cuesta. I started looking for a fulltime teaching position when my first son was born so we could get health insurance!”

He prefers playing his saxophone, but he learned being flexible and diversified garnered more gigs. “I’m a ‘doubler.’ I play, soprano, alto, tenor and bari sax, flute, alto flute, piccolo and Bb clarinet. So much of my opportunities have been connected to my teaching at Cuesta. I’ve played with Diane Schure of Manhattan Transfer and the Temptations at the PAC. I think if I were still in Santa Barbara, they would have just brought people up from LA and I wouldn’t have gotten to do those.”

McCarley added, “SLO is hard because it is still relatively small for what we have. For the good or the bad of it, we are stuck with most of the same people for everything.  Everyone is so nice that musicians should have no trouble finding a place. The groups I play in are established bands and we don’t really hold auditions. If someone couldn’t play anymore, we would probably hire someone we know to be the right kind of player (we need).”

Counsel McCarley gives his students, “The hardest thing is to keep focused and keep trying. There really are so many opportunities, but we sometimes get stuck doing the same things over and over.” Whether COVID-19, connecting with other musicians or finding balance, “It is always a challenge.  Even just practicing is hard. I have put concerts on at my house because I really wanted to play. I have joined groups I lead at Cuesta to keep my playing up.  COVID has been very hard for music, but having a fulltime job and four kids is also very challenging! It is important to have priorities when times are hard. I keep hanging on to my own music for the sake of my students and because I really feel that it is an important part of who I am.”

Coming up McCarley will direct the SLO County High School Honor Jazz Band on Saturday Jan 29 at 3 p.m. and then on February 5, 1-4 p.m. he joins in with Jump Jax at Broken. Readers wanting to join one of his Cuesta College classes, should check out www.Cuesta.edu.