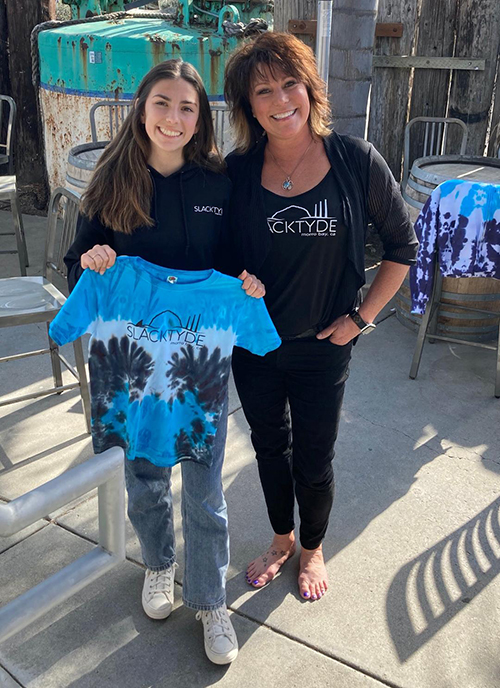 Dylan and Stephanie Bueno show off one of their shirts at Morro Bay’s Foghorn where brother Blake works. Photo by Judy Salamacha

Is it possible some folks attract dark clouds that create havoc every move forward they try to make? As Stephanie and Dylan Bueno smiled and laughed through the retelling of their family story, I wondered how I would match their hard luck story to the genuine peace they projected in its retelling. What I heard but was unspoken by this mother-daughter team that created their own apparel business, SLACKTYDE Morro Bay CA, during COVID-2020 was, Our family will endure; overcome all odds; This too will pass; Joy will come if only in moments we create; I must survive for my children and myself; We will survive and thrive together for ourselves and our mother.

What they put out there in the universe on SLACKTYDE Morro Bay’s website (www.slacktydebay.com) states the company’s name is based on a life lesson they have experienced the hard way. It also demonstrates their family’s philosophy:

“We are an apparel and brand developed by Dylan Bueno and Stephanie Bueno. Featuring the SLACKTYDE logo and specialty tie dye and bleach work. Here at SLACKTYDE we want you to remember to relax and enjoy the pause when the water is calm. Our story has been a journey of some pretty crazy tides! Some of the tough times in life are consuming and devastating and it’s taken us some time to understand, heal and enjoy the slack tide. It might only last one hour but one hour of complete calm in the middle of a crazy day, reminds us we can endure whatever tide comes our way and take that moment to enjoy the right now!”

Dylan and Stephanie shared the “crazy tides” and business adventure currently bringing them joy. Stephanie said, “We’re open about what has happened to us. If we can help another family’s life by sharing what we’ve gone through, it is worth it.”

Stephanie Bueno has four children, Blake, Kinser, Dylan and Dax. Team Bueno, I’ll call them. They are very close and got even closer after her husband, Robert, their father, committed suicide in 2010. The boys were 12 and 10, Dylan was 5, and Dax 1. They lived in the Central Valley close to extended family, who had a Cayucos vacation home they would enjoy for getaways. Stephanie’s father, her lifeline and cheerleader, lived in Santa Cruz. When the crazy tides suddenly turned and began to swallow her up, Stephanie knew her career path had changed from hairdresser to whatever it took to make life work for herself and her children.

Not long after their first family shock, Dylan was diagnosed with Hashimoto’s thyroiditis, creating extreme fatigue and growth issues. At Stanford Medical, Stephanie observed, “My daughter was dying before my eyes.”  Over the years, they have treated and watched Dylan’s disease and offered the family every kindness, but that meant years of regular trips back and forth to Stanford.

In 2015, not long after Dylan’s medical emergency, Kinser was diagnosed with Type 1 Diabetes. Suddenly he and the family had to learn to adapt to his Juvenile Diabetes. Stephanie wondered, “How long? “For life,” the nurse said. Stephanie answered, “I can’t take anymore.” The kindly nurse said, “I will teach you how.”

Next Dylan developed signs for Type 1 Diabetes. Stanford did even more tests and the family made more trips. Stanford offered a trial to offset the costs of housing during tests. They were testing an oral dose of insulin to replace diabetic injections. Normally interested in sacrificing herself to help others, Dylan knew the toll on her body would be too much. Since 2021 she joined her brother’s daily management of Type 1 Diabetes.

Just as suddenly, Stephanie decided Team Bueno needed to move to the beach. Family asked why and how? She told then she’d figure it out when she got here. Today, the boys have jobs in Morro Bay, Dax is still in elementary school, and Dylan is a high achiever both academically and with her commitment to the dance team at Morro Bay High School (MBHS).

And although they would have to weather other tragedies among close friends and family, life really was better at the beach. They learned to create momentary joyful experiences. For example, Stephanie loves her automobiles. In fact, she is a former sprint car racer well known around Central Valley racetracks. One Palo Alto adventure she created: “Dylan and I would test drive and dream of owning a Tesla.”

One night in 2020 a random request by Blake triggered the idea for SLAKETYDE while they were sheltered together during the pandemic. Blake asked Dylan to tie-dye a shirt for him that would represent Morro Bay. They brainstormed and investigated the possibility of a tie-dye wearing apparel business bringing in extra money. They started throwing out names for their company and wanted the name to represent finding peace living at the coast. The concept of “slack tide” came up, but it was already a brand.

Dylan drafted several ideas for the logo. A Valley friend and graphic artist, Phillip Baeza, created it. Dylan credits the multi-media class at MBHS for helping her learn the photography skills needed to produce their website. It’s been one learning curve after another, but they agree it has all been worth the effort. Once they found their supplier and products ready-made to order, there was instant demand for their brand.

Until recently Dylan tie-dyed the shirts. They now have enough orders, the tie-dyed shirts are ordered pre-dyed and their product line has expanded to multiple shirts of various colors, beany hats and whatever will work for them and their customers in the future.

The family is comfortable now accepting that every day can be either a challenge or can be an adventure. Their website  is as fun to explore as the Bueno family’s story is inspirational to learn. For example, their shirts have clever names that shout-out Shark Bite, Old Glory, and Rough Seas.

Be sure to check out the website’s “Look Book” section. Products are also available at Smoobage in Morro Bay.

The Buenos enjoy giving back blessings to Morro Bay as Morro Bay has graciously blessed them with friends and supporters. They supported Project Surf Camp, an organization for children with special needs to have the opportunity to get in the ocean to surf and paddleboard. Their family volunteered during the camp and SLACKTYDE provided all the camp shirts.

Here’s wishing rainbows for Team Bueno as we remember to enjoy the SLACKTYDE moments.