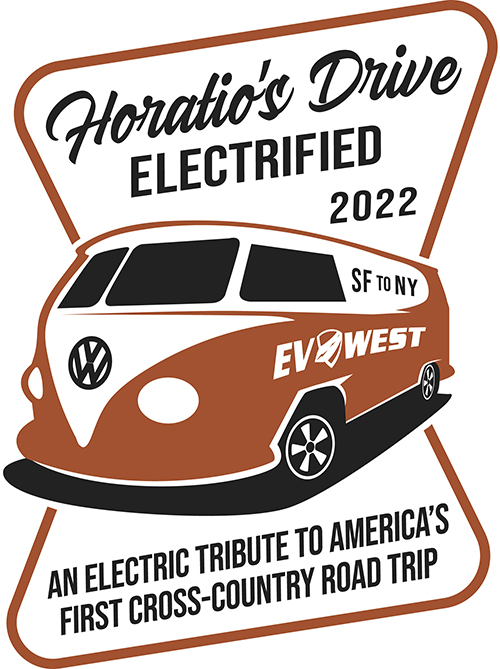 Morro Bay’s resident adventurer is planning another epic journey —retracing the first crossing of the U.S by automobile — but with a modern, even futuristic twist.

Jack Smith, whose claim to fame includes being among the first to push a skateboard across the United States, something he’s done five times since the mid-1970s, is about to make the journey with a custom built, electric, vintage, VW Bus, dubbed the “Rust Bus.”

“Horatio’s Drive Electrified, 2022” is the name of the expedition Smith and longtime friend and co-driver on the trip, Mike Adamski, who was instrumental in the founding of Central Coast Surfboards in San Luis Obispo, are planning.

The trip will follow the route taken in 1903 by Horatio Nelson Jackson — the very first man to drive across the country by automobile. Nelson, along with mechanic, Sewall Crocker, and a dog named Bud, made a $50 bet that he could drive across America, this at a time when automobiles might be lucky to make it across town.

“While in San Francisco’s University Club as a guest on May 18, 1903,” reads a history of Horatio’s Drive posted online, “he agreed to a $50 wager [equivalent to $1,440 in 2020], to prove that a four-wheeled machine could be driven across the country. He accepted, even though at age 31 he did not own a car, had practically no experience driving, and had no maps to follow.”

Nelson, “bought a slightly used, two-cylinder, 20-hp, Winton, which he named the Vermont, after his home state; bade his wife good-bye, and left San Francisco on May 23, carrying coats, rubber protective suits, sleeping bags, blankets, canteens, a water bag, an axe, a shovel, a telescope, tools, spare parts, a block and tackle, cans for extra gasoline and oil, a Kodak camera, a rifle, a shotgun, and pistols.”

Nelson, Crocker and Bud’s adventure captured the imagination of the nation at the time, but has almost been

forgotten. That is until the story was retold in a documentary film by famed filmmaker, Ken Burns, which was also Smith’s inspiration for this latest adventure.

“This adventure.” Smith told Estero Bay News, “was inspired by the Ken Burns/Dayton Duncan film, ‘Horatio’s Drive — America’s First Road Trip’ a documentary that [Smith’s wife] Cathy and I stumbled on about 6-months ago.

“Ever since my 1976 skateboard push across America with [fellow MBHS students] Jeff French and Mike Filben, I’ve been interested in traveling across America using traditional and alternative forms of transportation. I’ve pushed across four times — 1976, 1984, 2003 and 2013 — and rode an electric skateboard across in 2018 [solo, with my wife as my support crew].

“In 1983 and 1984 I was a member of an ABC Wide World of Sports crew that filmed the Race Across America bicycle races. I’ve also driven back and forth to Iowa numerous times.”

Those Iowa trips were for research on a movie script Smith wrote, “New Providence — The End of an Era,” which was about the end of 6-on-6 girl’s basketball play in Iowa.

So with a crazy idea to back trace Nelson’s historic feet, he needed a vehicle, and another old friend came through.

Smith said his long-time skateboarding friend, Michael Bream, who Smith said owned Gravity Skateboards — one of the largest long board companies in the world before selling it in around 2015 — rose to the challenge.

Bream is founder of EV West, the leader in “transforming sweet classic cars into sweeter classic cars by converting them to run on electricity,” Smith explained.

One mention of his idea to Bream, and he was all in. “He immediately responded ‘If you want to do this, I’ll loan you any electric vehicle I own,’” Smith said.

What resulted was a cool 1964 VW Bus, powered by an electric motor to hopefully carry them across the U.S. and back, on what will be another historical-themed adventure.

Once in New York, Smith said, Adamski plans to fly home and Smith will be joined by another childhood friend, Larry Newland, and the two will return to California following as closely as possible the old Lincoln Highway, the first road to traverse the nation.

So they planned to embark May 4 from San Francisco’s Palace Hotel — the same starting point that Nelson had on his history-making drive.

The plan is to follow Nelson’s route as best they can because frankly, Nelson’s drive was mostly over the Oregon Trail, the pathway to the West that was first blazed by the Lewis & Clark Expedition and became the main linkage for wagon trains of settlers from the Missouri River to the Pacific Coast all though the first half of the 19th Century.

Nelson faced one seemingly impossible obstacle to any automobile journey at the time — where to get oil, gasoline, and tires? After all, this was long before “fillin’ stations” opened in every town.

For Smith, the recreation of Nelson’s seemingly impossible feat, has it’s own modern hurdles, like finding electrical charging stations for the VW Bus, which has a range of about 180-miles to a charge. Ironically, that’s about how far Nelson’s car could go on a tank of gas.

Asked if he has the route mapped out based on available charging stations, Smith said, “Yep, especially since we will be traveling through some desolated places in the western part of the country. There are a couple of days that due to lack of dedicated charging stations, we will check into RV campgrounds with 50-amp service, to top off our batteries.

At 180-miles a day, how long will it take? “We’re shooting for 21 days for the Horatio’s Drive portion,” Smith said, “and about the same on our return route, the 1913 version of the Lincoln Highway.”

And of course, Nelson didn’t have any road maps, heck there were few roads period at the time, but Smith and Adamski have a plethora of maps to choose from — hard copies and the Internet.

Adding to the sense of adventure is the expense, which Smith said, after the vehicle donation they’re on their own. “For the most part we will be staying in campgrounds with the occasional hotel/motel. Campgrounds are great because of the availability of 50-amp hookups for recharging.”

Smith plans to document both legs of the trip. “We are definitely going to document the trip with video and still photography,” he told EBN, “with the hope of producing a documentary film and perhaps a book.”

The skateboard from Smith and friends’ first skateboard trek in 1976 is with the Smithsonian Institute in Washington, D.C., as is the electric board from his 2018 trip.

“As far as the Smithsonian,” Smith said, “they are aware of our adventure, so you never know. Horatio’s 1903 Winton is on display at the Smithsonian.” Somehow an electric, ‘64 VW “hippie” bus would seem to be an interesting addition for America’s Museum.

As a side note, Smith said the Smithsonian is planning a book about its display of skateboards, and he was asked to contribute the stories of that 1976 first push across America and the 2018 high-tech trip on the e-board.

But there’s something missing. What about a dog? EBN asked if Smith planned to bring a pooch along. Bud, who traveled with Nelson and Crocker, is famous in his own right (see: www.coastalcaninemag.com/issues/summer2014/bud).

“Actually,” Smith said, “we are …sort of. Julie Larsen, my favorite teacher that I actually never had as a teacher, at MBHS bought Mike and I a ‘stuffed’ dog to take along with us. His name is ‘Buddy.’ Julie has been very helpful in our research regarding Horatio Nelson Jackson’s drive across America in 1903.”

Nelson was wise enough to bring a mechanic along with him, but Smith and Adamski will rely on the Rust Bus’ crew back in San Marcos, Calif. “They should be able to talk us through any electrical or mechanical issues,” he said. “Michael [Bream] and I met through skateboard racing in the early 2000s, when he owned Gravity Skateboards.”

So why does traveling across the U.S. appeal so much to Smith? “I love traveling across America,” he said, “especially the wide open spaces. People often ask me what’s my favorite part of these adventures? My answer ever since the 1976 push, has been ‘the people we meet.’ There are a lot of good people in America.”