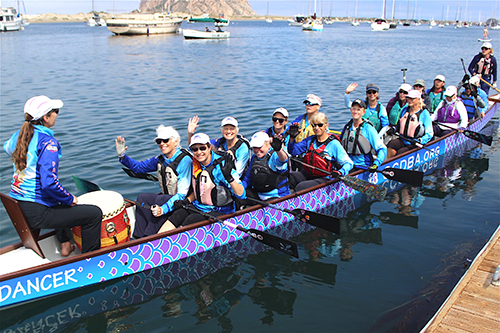 The Central Coast Dragon Boat Association on May 28 christened their new dragon boat canoes with a ceremony honoring a tradition over 2,000-years old.

The Dragon Boat Association, and its competition paddle team, the SurviveOars, gathered at Tidelands Park for the ceremony, inviting the Cal Poly Chinese Lion Dancers to perform in the ceremony.

The colorful costumed dancers traipsed down the gangplank to the floating dock and blessed the two racing boats, as ritual offerings were made and blessings made.

A highlight was members of the team painting in the eyes of the fierce-looking dragon, figureheads that mount to the bows of the canoes.

According to the Association, Dragon boats are 40-foot-long canoes powered by a team of up to 20 paddlers, with a steersperson manning the tiller, and a drummer pounding out a cadence for the paddlers.

CCDBA purchased the two boats after an impressive community fundraising effort led by the SurviveOars complicated by the Coronavirus Pandemic.

The new boats are Dragon Dancer, which paddlers named, and Rosana’s Ride, named in honor of beloved paddler Rosana Ortiz. The boats arrived In Morro Bay on May 18.

“We are excited to introduce these colorful, festive new dragon boats to the community,” said CCDBA president Miki Gilman. “We invite everyone to come and see what the sport of dragon boating is all about!”

Dragon boating originated in China and is now the fastest-growing water sport in the world, with teams in 89 countries, the Association said.

According to a history posted on the group’s website (see: CCDBA.org), “In October 2007, team SurviveOars started with a war canoe instead of a dragon boat. By June of 2008, Dr. Spillane donated the money to buy a brand-new Champion Dragon Boat.”

That boat, “Champion,” was used until May 2022 when it was sold to Dragon Max out of Berkeley.

One of the paddlers, Joanna Frawley in 2011, “donated the funds for a second boat. Another team in California was selling their boat, built by Swift in 2009, which became our ‘Joanna’s Joy.’”

But that boat had issues with leaking that couldn’t be fixed and was retired this year. Joanna’s Joy is being placed on display at the Morro Bay Maritime Museum.

“In 2018, CCDBA received a very generous donation from one of our paddlers, which allowed us to purchase a 10-person boat named  ‘Puff.’ Having Puff allows paddlers to practice with less than 10 people, and allows teams to better prepare for 10-person races.”

After the big fundraising effort, last February they ordered the two new boats from Pan American Dragon Boats out of Tampa Bay, Fla.

The SurviveOars, which started out as a group of cancer survivors, has competed at Dragon Boat races, winning titles and representing well the local dragon boat community. It is open to both men and women paddlers.

For more information on the association and maybe to join the fun, see: CCDBA.org.