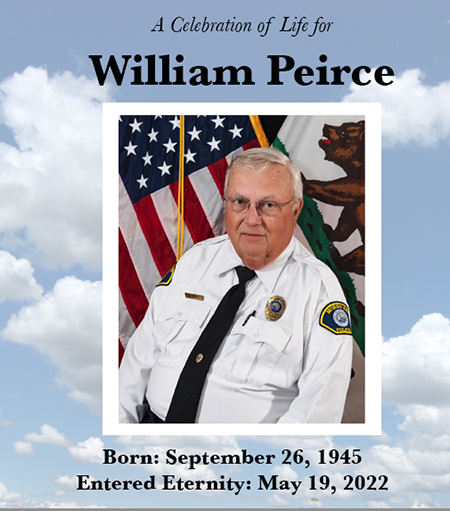 The funeral program from the service for Bill Pierce.

Indulge me with Remembering Bill Peirce Part 2. Journalist Neil Farrell summed up his life best in EBN’s (www.esterobaynews.com) June 02 issue. It stated, “In retrospect, a biography … would be almost too fantastic to believe and could rival a mid-sized encyclopedia in length. Unsurprisingly, it’s difficult to write so little about a man who did so much.”

Bill’s life was all about community involvement. People he touched from a myriad of sectors attended, smiled, and mourned his loss Saturday, June 4 at Morro Bay’s Tidelands Park. The following is but a smattering from the memorial’s presentations plus additional Bill Peirce memories offered.

Rock Harbor Cristian Fellowship’s Pastor Randy Ponder officiated. He got to know Bill serving as the Morro Bay Police Department’s chaplain. Bill was a longtime valued volunteer. “At first, Bill was a bit scary. I wasn’t sure how to take his humor, his wit, his fun sarcasm … Three years ago, his favorite Chaplain Jim Berg moved to Virginia. Out loud Bill wondered who would do his funeral. He pointed to me and said, ‘Put it on your calendar!’ Today, I’m so very privileged and honored to officiate at such a fine man’s memorial.”

After Bill closed his retail photo shop, Coast Electronics owner John Weiss became his boss. “I’ve known Bill for 30 years. He encouraged me to apply for Rotary District Governor, which became a BIG deal for me … Bill was the first volunteer the PD called so we knew he wouldn’t be at work until the scene was cleared. He was always gone the first day of school to be at Del Mar School acting as their crossing guard to make sure the kids got to school safely. He and Woody created the original sound system for Caroling Cops. He participated every year plus at every festival – every 4th of July – he was always on duty. We both battled different cancers together. He was my employee, trusted advisor, and friend.”

John admired Bill for many things, especially, “If Bill thought something needing fixing, his complaint would always come with his suggested solution. Bill made everyone better.”

Former Mayor Janice Peters loves to share her Bill story. “I was serving on the Planning Commission when I was appointed to the Morro Bay City Council to fill a vacant seat. Councilman Bill Peirce became my patient mentor and friend. We sat side-by-side for several terms. Councilmembers periodically travel out-of-county to meetings, and while at the League of California Cities in Lake Tahoe, Bill and I were mistakenly booked into the same room to the amusement of other attendees. Of course, by evening we were given our separate rooms, but for one afternoon we were roomies and posed as such together in our doorway. That was 20 years ago, but ever since Bill and I addressed each other as “Roomie.” We enjoyed the confused reactions of “friends,” who hadn’t heard the story. My Roomie Bill was an outstanding citizen and an admired friend.”

Hotelier, entrepreneur, and current president-elect for Morro Bay Rotary Club, John Solu wrote, “Bill always yelled at me and called me when I forgot to return my badge at the Rotary meetings.” Bill was treasurer then. “I used to deliver it back to him at Radio Shack so he wouldn’t keep calling me. LOL. Seriously, he helped me organize 456 (formerly Embarcadero Inn) – our hotel’s short wave radios and re-doing my cameras. He knew the business inside and out.”

Hal Abrams, founder and president of Estero Bay Radio 97.3 The Rock Community Radio called in to say, “Bill was my “partner in crime.” He taught me the technical and political mechanisms to create a community radio station in Morro Bay.”

In 2011 Hal pitched his concept to Bill. “He immediately jumped on board, found the location for the transmitter, explained to the council how valuable it was for Morro Bay, and for years handled the technical issues with only a phone call from me for help. He was my mentor and guide as I worked through city management and police, and fire communications.”

Chief Jody Cox could not hold back the tears that welled up as he began to speak to the large gathering for Bill at Tidelands. “This is a very difficult time for us … Bill was an integral part of the Morro Bay Police Department and the City of Morro Bay for many years. Bill joined the volunteer program in 2012, but his connection and affiliation with law enforcement goes way back to the 1960’s — writing parking tickets part-time at Cuesta College before graduating from Cal Poly in 1973 with a bachelor’s degree in journalism. When Bill decided he wanted to be a police volunteer, he had to fill out an application, go through a background check and write a purpose statement. When he was asked why he wanted to be a Morro Bay Police Volunteer, he responded: ‘I have spent most of my adult life volunteering for something. I spent 12 years on the Morro Bay City Council and volunteered for a myriad of other activities. I have worked with first responders for years, I love Morro Bay and want to give back to my community. One of the ways I can do that is by supporting our police department.’” With a smile, Chief Cox closed with, “I will miss Bill showing up unannounced wanting to discuss all the things we needed related to bringing our communications system up to speed. Bill’s presence, his commitment, and his historical knowledge will be greatly missed by all of us.”

When Morro Bay Rotary’s current president, Tim Olivas was the commander at Morro Bay Police Department, Bill was already a seasoned volunteer. Chief John DeRohan wanted Tim to take over when he retired, but he strongly requested Tim train at Command School. The bar was high to qualify to get in. Tim asked City Councilmember Bill Peirce to do something he did not like to do, write a recommendation especially for an upcoming staff position, but Bill did. Tim learned more life lessons at Command School that literally changed his life in all sectors and “made me a better man.” He also got the job, that is, until Sheriff Parkinson recognized his talents and stole him to be his trusted undersheriff.

Former MB Fire Chief Jeff Jones worked with Bill at Coast Electronics to upgrade the department’s communications system. “Top of the line was Motorola, but Bill advised Kenwood was just as good and cheaper. However, the Kenwood radios had a defect. They didn’t work when they got wet. Our firemen verified the defect with spray from their showers, so Bill battled with the company all the way in Australia to make it right.” Still involved with Morro Bay as past president of Rotary, Jeff was amazed “little ole Morro Bay had made an impact on the corporate communication world based in Australia through Bill Peirce’s persistent customer service.

Former Morro Bay City Manager and recently retired Avila Harbor Director Andrea Leuker wore suspenders to the service in tribute because she couldn’t remember an instance where Bill wasn’t wearing suspenders to match the season. She met Bill in the late 80s when she was with the recreation department, and he operated his photo store. He would later become her boss as Councilmember Peirce, one of the members to hire her as City Manager.

Bill’s straightforward way of life was simply to share his time and talents.” She listed a significantly long list of organizations he had volunteered his support. “Bill was a master at checking in with me, seeing how I was doing, and how work was going. Finally, Bill was a mentor to me (I never told him that, but I think he knew – I wish I would have told him!). He provided so many good examples and lessons, which I have and will endeavor to replicate in my life.”

This columnist believes a life well lived is what we all hope we will be remembered for. What better remembrance than testimony that we had a positive impact on at least one person’s life. Bill Peirce made a difference in many lives and his chosen community. He also provided multiple examples of the benefits reaped by sharing our time and talents with others to make our community a better place  — even after we are gone. Thank you, Bill.

← Previous: A Funny Thing Happened on the Way to Morro Bay New Dragons in Morro Bay →