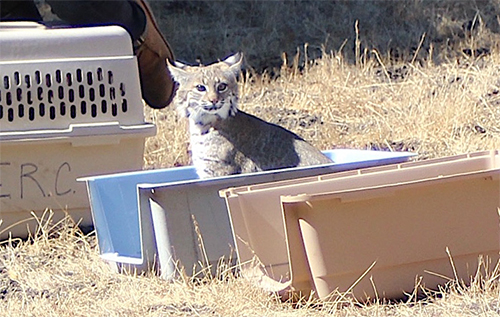 This bobcat was one of three from Northern California that were rehabbed and released on a Cayucos ranch in conjunction with Pacific Wildlife Care.

For about 35 years, the volunteers with Pacific Wildlife Care in Morro Bay have come to the rescue of sick, injured and abandoned wildlife, nursing them back to health with the goal of returning them to the wild.

It’s an organization that has hundreds of local volunteers and supporters but due to uncertainty over the future of its animal hospital and rehab center located on the Morro Bay Power Plant property, the non-profit organization is planning a major move to a new facility in SLO, lest it find itself abandoned.

Christine Johnson, a former Morro Bay City Councilwoman, was recently hired as PWC’s first executive director and is taking on the monumental task of fundraising to build a new hospital. Fortunately, they have already gotten over one major hurdle — they have a piece of land to work with.

Johnson said she’s been told that PWC started in the early 1980s, with people concerned about pelicans being caught in fishing line and then grew to be a certified organization to respond to oil spills and to rescue wildlife.

It’s that hands-on work of the volunteers that’s endeared the organization to local residents. “When we move,” Johnson said, “we want to make sure we maintain that close relationship with Morro Bay and the rest of the community.”

After several years of looking they found a 10-acre parcel on Buckley Road at Esperanza Road, which is off Hwy 227 (Broad Street) out by the County Airport. They had put a down payment on the property when someone donated the balance, some $800,000.

The lot is zoned agriculture and Johnson said the use they intend, a wildlife rehab center, must go into that land use zoning. She said the group had been looking around for property for 5 years and faced a looming deadline, as the lease on the current site has now expired.
“They always knew they had a timeline for how long they could stay at the power plant,” Johnson said. “We knew we were at risk of having to vacate with 90 days notice and return the land to the original condition.”

The group has been trying to negotiate a new lease for some time, but Vistra, the current power plant owner, has been unresponsive. Johnson explained that PWC actually subleases its location from the Marine Mammal Center, which has a triage facility next door.
All their attempts to negotiate led them to believe there was little interest in having them stay. “We had this ticking time bomb to move in 2021,” Johnson said. “We need a permanent home on property that we own.”

The group includes just a handful of paid positions including a veterinarian, and six full time staff and four are entry-level rehab technicians. They have a lot of turnover with the help but on the other hand, “We get a lot of enthusiastic college students.”
Their facility in Morro Bay is a patchwork of out buildings with the vet care and main intake building in a portable building, like one might see at a school.

They’ve added several cages to isolate animals that come in according to the care they need. They also have a large flight cage that’s equipped for water birds, which are the majority of their patients. “Two hundred different species can come in in a year,” Johnson said. They cared for 2,600 animals in 2020.

They also have several dedicated volunteers that have built flight cages at their homes and take mainly birds of prey to rehab them. Their success stories over the years have been countless.
Their plans to move recently got another shot in the arm when County Supervisors agreed to waive all planning and building fees for their project, which is now turning towards the design phase.
According to the County staff report on the fee waiver, Supervisors agreed to waive fees up to $207,295 for the minor use permit (MUP) and subsequent building fees.

“It’s great to have the support from the County Supervisors,” Johnson said. “They’ve been great, very helpful.” She added that a wildlife rehabilitation facility is a novel idea for County planners to decipher, as to the rules that apply.

She said they hope to be all moved in by the end of 2023. But they have a long ways to go to turn what used to be a hay field into a wildlife rescue hospital, but they’ll also get to work with a blank canvas and instead of a pieced-together facility, everything will be brand new, and they’ll have a proper facility for the volunteers to work their magic.

Johnson said they were not yet ready to launch a fund-raising campaign for the new facility, as they’ve hired a consultant, Netzel-Gregsby out of Santa Barbara, to fashion a strategy for the campaign.

They want to nail down the new facility’s costs and develop a budget, Johnson said, “and then move from there.” She added that 95% of PWC’s funding comes from donations. The group became a non-profit in 1987.

The Coronavirus Pandemic severely affected their work but now, with the virus on the run and it being baby season, the volunteers are coming back. “Last year,” Johnson said, “they went through spring and summer without volunteers.”
The rescue center isn’t open to the public at this time, but they are open 7-days a week if someone should find a sick or injured animal. Call the PWC hotline at: (805) 543- WILD (9453) and leave a detailed message and someone will call you back.

In the meantime, Johnson said her board president, Kimberly Perez, is working on a history project. They want to document the origins of the group and are asking anyone who did rescue work with them way back when to send an email to: president@pacificwildlifecare.org. They are interested in stories and photos of those early days when all the rehabbing was done in people’s homes.

← Previous: Swallowed by a Whale of a Tale Cayucos Will Have Fireworks July 4 →