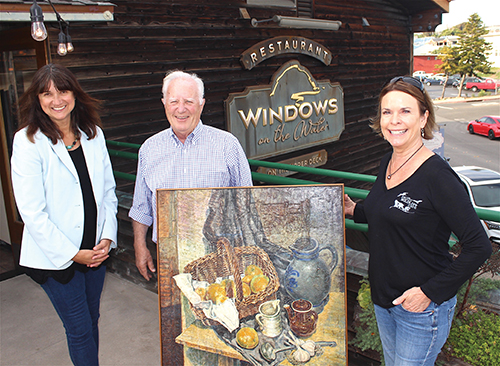 Stan Trapp, center, owner of Windows on the Water in Morro Bay, poses with Pacific Wildlife Care’s Executive Director, Christine Johnson, at left and Kelly Vandenheuvel at right, who is a co-founding member of PWC and a wildlife rehabber. The painting in the foreground is by Cayucos artist Nico Vandenheuvel, who is Kelly’s father-in-law, and was donated to PWC by Trapp for a fundraiser. The painting will be auctioned off sometime in early 2023. Photo by Neil Farrell

A local restaurant owner has given up a treasured artwork to support a local wildlife rehabilitation organization and its mission caring for injured wildlife.

Stan Trapp, owner of Windows on the Water and master leaseholder for Marina Square, donated a painting by noted Cayucos artist, Nico Vandenheuvel to Pacific Wildlife Care and plans are to auction off the oil painting, named “Still Life with Oranges,” to support PWC’s mission.

Trapp said he bought the painting in 1997 at a show Vandenheuvel had at a former Downtown Art Gallery. The painting has hung in Windows on the Water’s dinning room for over 25 years. Windows opened on the top floor at Marina Square in January 1997.

“It’s a great painting,” Trapp said. “We’ve always loved it.” But coming out of the COVID-19 response, which was a difficult time for all restaurants, they decided to give Windows a freshening up that included changing the artwork.

The new artwork features large, dramatic photographic work, some of which his grandson produced, Trapp said.

He commented that Nico Vandenheuvel, who still paints at 93, is a famous enough artist that he wanted to make sure that someone else had the chance to own and enjoy the painting.

As for how much it’s valued at, Trapp couldn’t recall what he paid for it, but surmised it’s probably worth several thousand dollars more now.

Trapp is friends with Kelly Vandenheuvel, who is a co-founder of PWC and rehabs birds of prey. She is also Nico’s daughter-in-law (Kelly is married to Art Vandenheuvel, Nico’s son).

Recently Kelly, Trapp and PWC’s Executive Director, Christine Johnson met at Windows to accept the painting. Johnson said the organization is “extremely grateful for this generous donation from the Trapp Family.”

PWC is currently raising money to support its day-to-day operations at its Morro Bay treatment center on the power plant property.

PWC is the only licensed organization in SLO County certified to work on animals soiled in the wake of an oil spill, like the Refugio Beach spill of May 2015, and Unocal’s Avila Beach spill in August 1992.

They are expected to soon start a major fund-raising campaign to build a new, modern, triage and rehabilitation facility.

The group had a piece of land donated to them, located out by the County Airport in rural SLO. Plans are to build a new, modern, rehab facility on that site and move from the current rehab center located on the Morro Bay Power Plant property.

Trapp’s donated painting will be included in an online auction being organized now and slated for some time in early 2023.

Begun in 1984 by a small group of locals who wanted to do something about sick, inured or orphaned wildlife, PWC is SLO County’s only licensed rehabilitation center that cares for injured birds, mammals, and reptiles.

PWC is a non-profit, public benefit organization, “that is comprised of members, donors, volunteers and professional animal care staff who embrace and support the Mission, Vision, Commitment, and Values of the organization,” according to the PWC website. See: pacificwildlifecare.org for more information about the group.