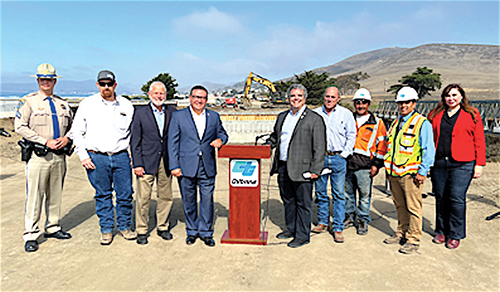 Caltrans and local elected officials took a bow and a pat on the shoulder recently when they gathered on Hwy 1 in Cayucos to celebrate funding for two highway bridge projects that combined, cost over $28 million.

Several months ago, Caltrans contractors began construction on the Hwy 1 northbound bridges over Toro Creek and Old Creek in Cayucos, which are within a couple of miles of each other.

Caltrans called a news conference in the construction zone to tout the fact that the money for these projects came from the $1.9 trillion Federal Infrastructure Bill and SB-1, California’s special gas tax that raises money for roads projects.

With Toro Creek, $1.2 million came from the federal government and $11.8 million in SB-1 monies, according to a news release from Caltrans’ Dist. 5 in SLO.

With Old Creek, $1.3 million came from President Biden’s Infrastructure Bill and $14.4 million from SB-1’s gas taxes. It should be noted, however, that no matter whether from the Federal Government or State Government, all of this money comes from taxpayers.

The construction jobs involve ripping out the old bridges and their supports and footings, tearing up the creek beds with heavy equipment in the process. Both creeks are pretty much dry during the summers but can flow out to sea in heavy winters.

Caltrans Dist. 5 Director Tim Gubbins said, “These bridge projects were able to become shovel-ready because of the availability of federal funds for these regional transportation projects. This funding source is important to advance our work on the Central Coast.”

Caltrans spokeswoman, Alexa Bertola, said both projects are scheduled to be completed in Spring 2023, if the weather cooperates. Both jobs have been busy pouring new, reinforced, concrete support columns which when done should all but end the work within the creek beds and move to installing the bridge decks.

Such jobs take years to study, design, review and lastly, fund especially when competing for funding with other projects up and down the state.

“Road projects progress through construction phases more quickly based on the availability of SB 1 funds,” Bertola said, “including projects that are partially funded by SB-1.”

Signed into law in April 2017, Senate Bill-1 was designed to raise $5.4 billion a year for 10 years in order to address California’s numerous road and bridge maintenance problems and trickle down to include local and County level projects too.

The SB-1 gas tax — called the “Road Maintenance and Rehabilitation Program” — set up a new special fund within the Department of Transportation to account for the $5.4 billion a year.

It added a 12¢ per gallon tax for gasoline (adjusted annually for inflation); half of a 20¢ a gallon increase for diesel (plus inflation); increased vehicle registration fees by $25 to $175 a year depending on the value of the vehicle; and initiated a $100 minimum registration fee for zero-emission (electric) cars.

While the gas and diesel taxes took effect immediately, the registration fee increase kicked in Jan. 1 2018 and the $100 electric car tax began July 1, 2020.

Readers are reminded to drive cautiously through all construction zones, especially these two Hwy 1 areas. Northbound traffic at each site has been diverted across the median onto the southbound bridges, in a smooth if somewhat tricky new “S” curve lined with cement K-rails that would no doubt put a serious dent in one’s vehicle if they were sideswiped.

If readers would like to know more about SB-1 and see where your tax dollars are being spent, see: rebuildingca.ca.gov.