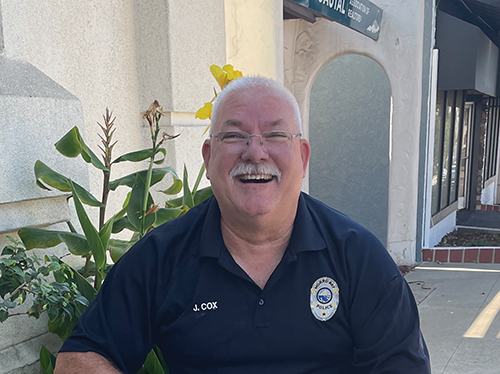 The City of Morro Bay will need a new police chief to go along with a new harbor director, as a second City department head has put in retirement papers over the last three weeks.

Morro Bay Police Chief Jody Cox announced his impending retirement on Oct. 10, with his last day with the City set for Dec. 31.

Chief Cox said in a statement, “Making the decision to retire has been a very long and difficult process. After nearly 35 years of public service in the Law Enforcement profession, it is time to focus on my family and our grandkids.

“The last 10 years here in Morro Bay have been the highlight of my career, because of the people, the community, and especially my team at the P.D. and the City staff.

“I could not have imagined a better place to live and work. It has been an absolute honor and privilege to lead this department, and we have assembled an amazing team of people at the PD.”

City Manager Scott Collins, who will handle finding a new police chief, said, “Jody embodies leadership. He took command of the Morro Bay Police Department at a very important time, as law enforcement was experiencing radical change as a profession. Despite all the related challenges associated with change, he found a way to strengthen ties and build trust with the community, evolve the department to meet modern policing standards, and mentor the next generation of peace officers to equip them to lead our City into the future.

“We are forever grateful for all he has done to empower our officers, command staff, police administrative staff, and the community to keep Morro Bay safe. We will miss him, and we wish him all the best in the next chapter of his life.”

Cox was hired at MBPD in 2012, joining the local force as a sergeant. He’d already served over 24 years in law enforcement with the Tulare County Sheriff’s Department and Tulare P.D.

After coming to Morro Bay, he soon was promoted to Commander after Cmdr. Bryan Millard left to become the police chief of Cuesta College.

He made Police Chief in November 2018 and brought to town an old colleague from Tulare County, Amy Watkins, to become the new commander.

If the city manager doesn’t hire a replacement before Chief Cox leaves, Cmdr. Watkins would be the likely person to step in as interim chief. She would also seem a good candidate to be the next chief.

“I am very comfortable they will continue to build upon the solid foundation and strong community relationships we have developed,” Chief Cox said of his department staff. “As for my immediate future plans, I look forward to spending a lot more time with family, building in my woodshop and a little more time cruising the coast on my motorcycle.”

His tenure leading MBPD has had several highlights. “As Police Chief,” the news release said, “Jody led an expansion of programs aimed to connect the Department and the community, including launching the Citizen’s Academy, Police Chief’s Advisory Board, and mobile phone app, among many other initiatives.

“In addition, Chief Cox and his command staff were instrumental in bolstering the Department’s training regime and aiding the City and community throughout the COVID-19 pandemic.”

AS for what happens next, “The City plans to conduct a survey of community members and MBPD personnel on what they hope to see in their next Police Chief, to help inform the City Manager’s decision on Police Chief succession.”

In past recruitments for police chief, Morro Bay has gotten as many as 60 applicants, and with veteran police officers from large metropolitan departments leaving the big city in droves the past couple of years, there is likely to be no shortage of potential police veterans that would like to take over running a small-town department in a sleepy little fishing village.