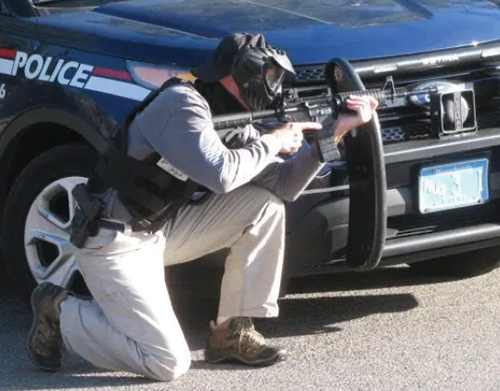 Firemen teach, “Stop-Drop-Roll” as how to react when your clothes catch fire.

For police these days the mantra is “Run-Hide-Fight!” when you find yourself in the worst imaginable scenario — among the random targets of a maniac with a gun.

Morro Bay Police Cmdr. Amy Watkins on July 8 addressed a small group of people at the Morro Bay Senior Center on what to do if there’s a gunman spraying bullets about.

“This is a very serious subject,” Cmdr. Watkins said. “Over the past few years you’re hearing more and more about it.”

Mass killings like the recent attacks at a grocery store in Buffalo, NY, the school shooting in Uvalde, Texas, and the 4th of July Parade sniping in Highland Park, Ill., normally come with some breathing room in between. But multiple shootings “Occur every single day,” Cmdr. Watkins said.

According to dictionary.com, a mass shooting is “a single incident involving the shooting with one or more firearms of a number of people, but more than two and typically a large number, especially when the victims are random.”

So not every mass shooting involves dozens of people or random victims, and most don’t make headlines outside their immediate area. Given the massive amount of gun violence erupting daily in big cities, it’s the spectacular killings of innocent people by rogue gunmen that garner the national media’s coverage.

She said in her previous 20 years as an officer in Visalia, “We had three mass shootings, workplace shootings. So I’ve dealt with this firsthand. It’s a difficult subject to approach,” she added, because of all the violence involved.

Since 2006, she said, the U.S. averages an active shooter incident every 2.9 months. “So the odds of you being involved in one, is very slim.” But, “In reality, these things are going to happen.”

She said that witnesses say they thought the gunshots were fireworks or a car backfiring. “People don’t think it’s real. “

She described it as scary, frightening and fearful. She recommends you have a plan wherever you go, look for emergency exits or somewhere that you could hide if you had to.

“In all likelihood,” she said, “it will be a whole lot better if you have a plan.”

When an active shooting starts, you should immediately take cover. “The harder it is to see you or hit you, the safer you are.”

You should try to stay calm and think clearly, visualizing your escape. Use cover like furniture to conceal yourself, she added. And don’t hesitate to force your way out.

“Use emergency exits, windows, the back doors, kitchens, stockrooms,” Cmdr. Watkins said. Most buildings have multiple exits and emergency fire doors, too. Hopefully, you won’t have to hide for long.

“The police are minutes away not seconds,” she said, “so you must take measures to protect yourself.

“If you can help others without putting yourself in danger, do so.”

If exiting is not an option, she said to find an area where you can lock down and secure the location. Then, “Lock and barricade the door; block the windows and mute your cell phone.”

But don’t make your hideaway a trap. “You want to find a place to provide protection, a place with a lockable door, but don’t trap yourself. Go where there are more options to escape.”

If you call 911 make sure you are safe first, and leave the line open, she said, so dispatchers can listen. “Sometimes an open line can be very helpful,” Cmdr. Watkins said.

“If you can’t run then hide,” she said. “Cover yourself behind anything that a bullet can’t penetrate. Conceal yourself.”

“An active shooter’s goal,” she said, “is to get as many casualties as they can.”

And if running and hiding don’t work, she said you must fight for your life.

“Defend yourself,” Cmdr. Watkins said. “Try to disrupt the shooter’s ability to see, his ability to breathe or to control his weapon.”

Things like chairs, fire extinguishers, and in the case of the Senior Center’s rec room, pool cues, make good bludgeons. You are literally fighting for your life.

“There are lots of stories of citizens who take down a gunman because they chose to fight,” she said. “If you can run, get out of there.”

She said when you are in imminent danger, “There are no rules — hit, strike, spit, bite, whatever you have to do. The strength of a person is more than you know, especially when you have adrenaline flowing through you.”

So what places are the safest? “There’s no pattern or method to where they happen,” she said. “Malls, schools, churches, theaters, workplaces, those have all been places where this happens.”

Such a person is most likely going to keep shooting until they are stopped.

She explained that most active shooter incidents are over within 10 to 15 minutes. But it could be longer, as with the Texas school shooting, which lasted well over an hour because of a questionable police response.

What happened in Uvalde is not how police train for these events, she said.

“Law enforcement’s first response is to stop the suspect, not render aid to victims. EMS comes in when it’s safe.”

As for motive, “It could be revenge, hatred, a bad marriage, child custody, or simply put — it could be anything at all.”

“The most likely time and day of the week when these happen is daytime, Thursdays through Saturdays, interestingly.”

Police have special equipment like “active shooter vests” which are worn over the top of the normal bulletproof vest. They have armored plates in them.

They also have helmets and goggles, “and we all carry AR-15s.”

The two robbers were heavily armed with automatic weapons and body armor, and police, “commandeered rifles from gun stores,” so they could match firepower. “After that and Columbine, law enforcement acquired these weapons.”

Now they get about 400 hours of active shooter training, and have special “go bags” packed with the added protective gear and weapons. “If this does happen,” she said, “we need to be prepared.”

She noted that SWAT units arose from the LAPD shootout with the Symbionese Liberation Army in the 1970s. “SWAT,” she said, “you’ve got to have it but you hope to never need it.”

Being prepared to “Run-Hide-Fight,” isn’t normal. “We’re not supposed to live this way,” Cmdr. Watkins said. “But events force us to.”