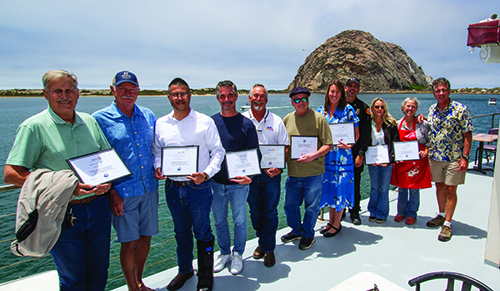 Announcement! Announcement! For the first time since the Rotary Club of Morro Bay was established October 13, 1964, the members will officially meet Tuesdays at noon literally on Morro Bay – specifically dockside on the Chablis.

During his presidential year, John Solu intends to showcase the Morro Bay business community. A variety of owners and operators will be invited to tell their stories during the meeting’s programs. For years John and Joan Solu owned and operated multiple Morro Bay hotels. He believes sharing lunch in a beautiful setting and discovering firsthand what a business owner does day-to-day is the best way to get to know someone. “People prefer to do business with owners we get to know,” he said.

During the last meeting, Solu introduced Captain Annie as his “community hero” and thanked her and husband, Executive Chef Rodney Clapp, for stepping up and partnering with Rotary during his presential years.

To kick off the “B-to-B” concept, Solu’s first official meeting on July 12, he encouraged members to host their “community hero.”  Past Rotary District Governor John Weiss introduced this recognition program during his year as Morro Bay Rotary’s president.

“Members host someone that has significantly impacted their lives and/or made Morro Bay a better place to live,” Weiss explained.

“Bob worked his way through Cal Poly, then the ranks to become Morro Bay’s Chief,” Jones said. “He retired in 2002 yet remains active. As interim director of the SLO County Emergency Medical Services Agency, he wrote and trained emergency planning throughout California. COVID impacted Morro Bay during my term as Rotary president. We helped the business community by sourcing local sanitizer and delivering it free to every open business. For community shut-ins, Bob answered Chief Knuckles’ call to serve. CERT and Rotary members made 80 calls per week for 39 weeks totaling upwards to 15,600 calls and delivered medications, food, gave mental support, and other items for those immuno-compromised individuals sheltering in place.”

Chief Neumann commented, “The Covid Caller project was the most worthwhile program I’ve ever worked on.”

“You have probably noticed the young men and women of the Grizzly Youth Academy helping out with various events in Morro Bay,” Piette said. “Our students have elected to come to us leaving an environment that has put them at risk. Instead, they have chosen to learn the values, life skills, self-discipline and receive their secondary education with us.” The curriculum combines California’s required subject areas with National Guard training to intervene and reclaim at risk youth.

“Rescue efforts are important, but Lori’s ability to keep the department running smoothly is even more valuable,” Endersby said. “She deals with our staff and the person off the street wondering where somewhere is located or why the showers aren’t working.”

Lori said, “I love coming to work and working with people.”

As he introduced Bear McGill, the founder of Honor Flight Central Coast California, Rotarian and veteran Thomas “Worth” Vogel was overwhelmed by the experience and the closure he felt during his hosted Honor Flight this past spring. He attended with immediate rotary past-president Tim Olivas and Tim’s father.

“l always felt guilty that I was the lucky one that came home,” said Vogel. McGill said Vogel’s experience is the most common thread among the many veterans our group has taken to Washington DC to see their service’s memorials and say goodbye to buddies they left behind.

Currently over 350 local veterans are waiting their turn. For more information, go to honorflightccc.org.

Morro Bay Police Chief Jody Cox introduced Morro Bay’s Sgt. Gene Stuart. “Besides his regular duties Sgt. Stuart was selected for his community activity in supporting local Morro Bay families with children during the holidays – supplying them with gifts and food – for supporting community events by donating his personal Shaved Ice business and for all his work designing and selling merchandise to support the Morro Bay Peace Officers Association.”

As the author of this column, indulge me as I write what I wanted to say but didn’t due to time constraints. I know many will agree with me – our Morro Bay community hero is truly Erica Crawford, CEO/President of Morro Bay’s Chamber of Commerce. It has only been two years since I was personally inspired to invest in the Chamber due to her exceptional work ethic, business advocacy and her leadership of an ever-evolving and currently exceptional board of directors.

I have always been involved in the Chamber — here and Bakersfield — but in Morro Bay my membership was always affiliated through the newspapers I have written for. I met Erica her first week on the job, and I knew in my heart she was a keeper. I had invited her to meet the CEO and Vice President of the San Diego Maritime Museum, who were visiting to finalize plans for the San Salvador visit, which ultimately helped fund the first structure built by MBMM. When the Chamber finally introduced a Governmental Advisory Committee and became a true active partner with the City of Morro Bay advocating economic development, I joined and agreed to serve on the GAC. Erica then showed all of us her passion for Morro Bay businesses by communicating and working with all of the city’s businesses regardless of membership spending countless hours keeping everyone informed during the changing policies of COVID-19. She continues to pledge the Chamber’s advocacy and best practices for our business community. And, indeed, she has never disappointed me or Morro Bay.

Retired Morro Bay fire chief Steve Knuckles introduced the current leader, Chief Dan McCrain thanking the fire chief for his ability to take control of the new job so quickly and his ability to draw up comprehensive plans for protecting MB citizens so fast.

Chief McCrain, who previously served in Cambria, said he has enjoyed working with people in Morro Bay and intends to get more involved in the years to come.

John Weiss introduced Morro Bay’s forever-vigilant reporter Neil Farrell, who has written for every publication that has produced community news for the Estero Bay.

“I’ve had the privilege to work side-by-side with Neil,” Weiss said. “He believes in getting to the truth of an issue, doing his homework by digging deep, enjoying a tongue-in-cheek article from time-to-time, and shooting that community involved photo — the one that goes on the refrigerator and stays there even after the kids grow up.”

Farrell graduated from Cal Poly, interned at The Sun Bulletin, and his first assignment was to write an obituary. “I had no idea what I was doing, but it came easy, he said. I believe I was born for this job.”

I’m sure Publisher Dean Sullivan who worked with Neil when Sullivan first created The Bay News and hired him back to write for EBN, will agree Morro Bay is lucky to have Neil Farrell keeping us all honest.

Weiss’ concluded the program introducing Dean Heilman. “I invited Dean well over 100 times to Rotary. He finally attended not knowing he would be honored. Dean was in law enforcement for the City of Los Angeles as a police officer volunteering to work in poorer areas. He then worked for MBPD and finished his career with Fish & Game. After retirement, Dean served as interim chief at Port San Luis for nine months. I respect Dean not only for his public service but as a volunteer for the Salvation Army serving those in need. Dean epitomizes Service Above Self. [Rotary’s motto].”