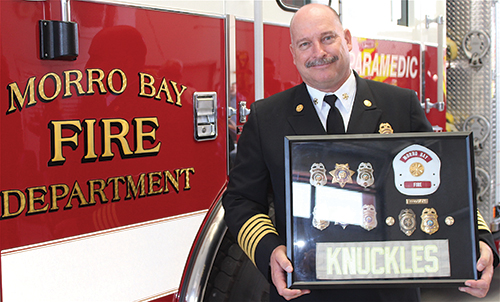 Retired MBFD Chief Steve Knuckles was given a framed collection of the various badges that he’s worn in a more than 30-year career in the fire service.

In what the city manager called a “momentous occasion,” the community said “thank you and good-bye” to the eighth and welcome to just the ninth chief in the 90-year history of the Morro Bay Fire Department.

City Manager Scott Collins presided over the July 30 ceremonies that served as a retirement party for now-retired Fire Chief Steve Knuckles and a welcome party for his replacement, Chief Daniel McCrain.

Collins told the crowd of over 100 at the Harbor Street Firehouse that Knuckles was one of the best public servants he’s ever worked with. “We’re here to make a positive impact for our community,” he said, “for the people we serve.”

Knuckles has done that and more since being named chief in 2013 including coming up with the money and donations that paid for the equipment you see here, Collins said, referring to two new fire engines and a ladder truck and countless more equipment that help make MBFD what Collins said was the finest fire department in the State.

Knuckles, he kidded, “could squeeze blood out of a budget turnip like no one else.”

Collins commended Knuckles for an outstanding job organizing the City’s emergency response last year during the height of the Coronavirus Pandemic, making sure the citizens were looked after and helping the County Health Department with its pandemic response.

Fr. Ed Holterhoff of St. Timothy’s Catholic Church, who himself is slated to retire soon, said a blessing, including that “The fire department here is beloved.” Fr. Ed praised the lifesaving, dangerous and life saving work the firefighters and all first responders do for the community.

Knuckles was given a certificate from State Sen. John Laird, delivered by his representative Clint Weirick and MBFD Capt. Travis Hasch gave sincere thanks to Knuckles from the crew, and then welcomed new Chief McCrain, as well.

Knuckles had a long list of people to thank for all they do for the community and the department that included Fr. Ed, Carla Wixom president of the Friends of the Fire Department, retired Chiefs Mike Pond and Jeff Jones, the Mayor and council members, and thanked his twin brother, mother and family for their support.

His mother watched him join the fire service — at Atascadero Fire — back when he was 18, Knuckles said. “When I was skinny and had long hair,” he joked. He said a fire chief makes sacrifices to do this job and “The No. 1 sacrifice is that you’re married to the City first. The City has to come first.”

“This has been the greatest job,” he continued. It’s a job where you get to help people and no matter the question, “The answer is always ‘Yes.’”

He called the firefighters his friends and said, “My No. 1 priority is to see that they never get hurt. Pound for pound, I really believe you’ve got the best public safety crew. These guys made me a better person.”

McCrain’s family — wife Stephanie and two young daughters — were on hand to watch him accept his new job, which he started July 31 and do the official pinning on of his Chief’s badge — serial No. 9 — and rank insignia collar pins for his dress uniform.

He was hired by Collins out of a field of 20 applicants and brings over 27 years of experience in fire/paramedic and emergency management service to Morro Bay, including captain with the Cambria Fire Department. Chief McCrain thanked his family and “all the people who have supported me in my career.” That included members of the Cambria Fire Department and Ambulance service, which he used to oversee, as well. He thanked Knuckles too. “Your contributions are too numerous to count.”