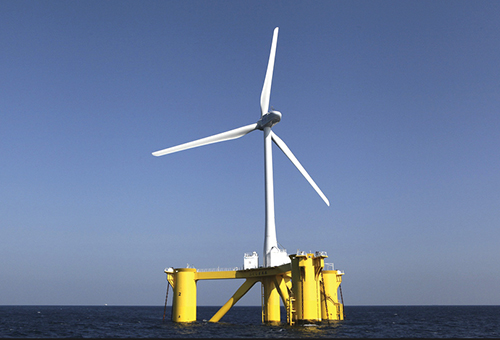 This shows one possible design of offshore wind platforms being developed by a Japanese company.

The State of California has doubled-down on a commitment to sustainable energy with the Governor’s proposed budget, including a significant lump of cash for offshore wind development.

Part of the “Clean Energy Investment Plan” and totaling some $2 billion, the money is supposed to spur “additional innovation and deployment of clean energy technologies in the state’s energy system,” the Governor’s Office said.

The biggest expenditures is $962.4M, “to provide resources to accelerate de-carbonization of existing buildings.”

The wind monies will go to the California Energy Commission and be used to “advance the development of offshore wind energy in federal waters off the state’s coast.”

Naturally, it will create a new bureaucracy. “This involves creating an Offshore Wind Energy Deployment Facility Improvement Program to advance the capabilities of deploying offshore wind energy off California in the areas of facility planning and development.”

Currently, there are two areas being eyed by Uncle Sam for wind farms — off the Coast of Humboldt County and off the Coast of San Simeon, a site that would conceivably bring power ashore at the mothballed Morro Bay Power Plant.

The Bureau of Ocean Energy Management or BOEM has been working towards holding a lease auction for the so-called “Morro Bay Call Area” some 399 square miles about 30 miles off San Simeon, which the Biden Administration believes could have 4 gigawatts (4,000 megawatts) of generation capacity.

The funding comes a few months after enactment of the Offshore Wind Bill — Assembly Bill 525 — in September 2021. That law “would require the Energy Commission, on or before June 1, 2022, to evaluate and quantify the maximum feasible capacity of offshore wind to achieve reliability, ratepayer, employment, and de-carbonization benefits and to establish offshore wind planning goals for 2030 and 2045,” reads the bill’s text.”

The bill requires the Energy Commission “to submit the strategic plan to the Natural Resources Agency and the Legislature on or before June 30, 2023.”

BOEM for its part is working through a schedule for review of the matter, including environmental impacts being conducted now, and leading to a possible auction of lease sites in the Morro Bay Call Area sometime this coming summer.

But don’t think offshore wind could start anytime soon, the proposition has a mountain to climb in terms of environmental study, engineering, bureaucratic red tape, logistics and more to iron out, not the least of which is where to locate the necessary maintenance yard.

A study out of Cal Poly determined the operation would need about 40-50 acres for a maintenance yard, located adjacent to a deep-water port, with room for a huge floating work platform (quay), to maintain the hundreds of floating wind turbines.

Since no such locations exist in SLO County, the likely location for a maintenance yard is Port Hueneme in Ventura County.

And in an executive order issued last year by President Joe Biden, part of the infrastructure needs will be tender boats. The President suggested they would build one each for East and West Coast offshore wind energy projects.

Castle Wind, which is a partnership of German Energy Company, EnBW North America, and Trident Winds, is the company that started all this movement towards harnessing offshore winds, approaching BOEM with the idea nearly a decade ago.

Castle Wind and the City of Morro Bay signed a memorandum pledging to work together on the project.

According to its website (see: castlewind.com), the company wants to build 1,000 MW of floating turbines, “which will harvest the vast offshore wind resource of California’s coastlines to provide long-term economic and environmental benefits to the City of Morro Bay and San Luis Obispo County.”

The turbines are expected to be 10 MW capacity each by the time they are ready to build, so to get 1,000 MW, they’d need 100 turbines.

Castle Wind ‘s FAQs page confirms some of the challenges they face: “Due to the size of the offshore wind components, fabrication of the floating offshore wind systems [FOWS] will take place at a ship building facility with adequate staging areas.

“Once in service, we expect the Castle Wind Offshore operations and maintenance personnel to live locally and work and service the project from nearby shore-based facilities. The Morro Bay harbor will be used as a staging port for the project operation and maintenance.”

As for who will make these massive structures, according to an article on Jan. 21, 2022, on the www.offshorewind.biz website, the Japanese are making moves to get in on the ground floor of offshore wind farms with a consortium of companies, collectively called, “Japan Marine United Corporation” (JMU).

That collaboration includes Japan Marine United Corporation, Nihon Shipyard, and Toa Corporation, and was formed to design, engineer and mass produce the platforms and anchoring systems for offshore wind turbines.

“The consortium says it aims to develop a mass production method and cost reduction of floating wind foundations, mooring/anchoring systems, installation at sea in every aspect of Engineering, Procurement, Construction and Installation,” according to the article.

Apparently, last July, the company received a report on the feasibility of offshore wind and decided to go ahead with their plans for “semi-submersible” floating wind turbines up to 12 MW each.

The article explains how the different companies will divvy up the workload, “Nihon Shipyard will take on the engineering aspect of floating foundations and their mass production and cost-efficient installation, and developing offshore support vessels for offshore wind projects, while Toa Corporation will work on developing a cost-competitive wind turbine assembly procedure.”