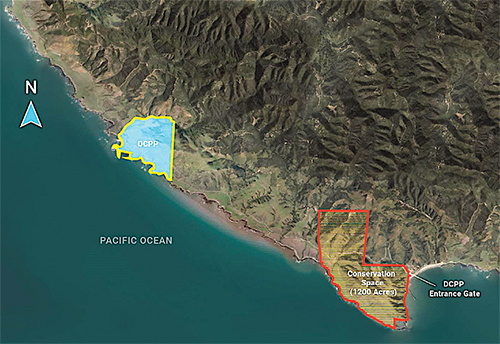 Map shows the Diablo Canyon Power Plant in blue and the 1,200-acres site that now has a deed restriction over it, in the lower right in red.

The first sizable chunk of the Diablo Canyon Power Plant property has been taken out of play for future development, Pacific Gas & Electric announced on Nov. 2.

PG&E, reads a news release, “has completed and recorded a deed restriction of 1,200-acres of land near Diablo Canyon Power Plant in San Luis Obispo County, owned by Eureka Energy Company [a subsidiary of PG&E], to preserve the pristine coastline and prevent any future development. The deed restriction also allows for preservation of cultural resources.”

The involved property is at the southern end of Eureka’s Property, PG&E said, and is about 10% of the total DCPP lands and covers Point Buchon almost in its entirety. The property consists of coastal bluffs, rugged coastline, oak woodlands, coastal plateaus, offshore rocks, and was once the home of the Chumash and Salinan peoples.

Several years ago, PG&E bought a private ranch that was located between the DCPP and Montaña de Oro State Park. In 2007, PG&E started allowing the public to hike the ranchlands, which include a place called “Windy Point.”

But the newly protected acreage is far from that area, and includes lands surrounding the historic Point San Luis Lighthouse.

“These lands surround and protect the Point San Luis Lighthouse from encroachment,” the news release said, “while preserving recreational opportunities and access to the venerable and historic lighthouse.”

PG&E’s Vice President of Decommissioning and Technical Services, Maureen Zawalick, said, “For nearly half a century, our team has been stewards of these lands and we have worked with vigor to sustain the environmental quality of the 14-mile shoreline and 12,000 acres of grasslands and forests through a series of innovative best management practices. The land is largely maintained in its natural state.” Cattle also graze coastal grasslands on bluff tops throughout that area.

Point Buchon Trail is a 6.6-mile round trip hike accessed through Montaña de Oro (follow Pecho Valley Road until it dead ends inside the park and then start walking southerly). The Point Buchon Trail has been open to the public since 2007.

The Pecho Coast Trail is accessed in Avila Beach with the trailhead near the Port San Luis harbor facilities. There are two, guided hikes to choose from — a 3.75-mile round-trip hike to Point San Luis Lighthouse and an 8-mile round trip hike to Rattlesnake Canyon.

The deed restriction was a special condition of the California Coastal Commission’s Coastal Development Permit issued in 2006 for replacement of DCPP’s steam generators.

To watch a video of the lands that are being protected, see: pgemarketing.app.box.com/s/ie3prmnmjlajqpp6abfsws0aaqzso6li.