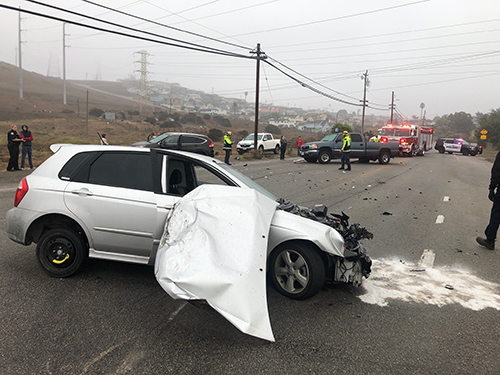 Police are investigating a 3-car crash on Main Street reportedly caused by an alleged drunk driver going too fast while exiting Hwy 1.
According to Morro Bay Police, officers and firefighters responded at 5:13 p.m. Friday, Oct. 22 to a car crash at Main Street and the northbound Hwy 1 off ramp. MBPD Cmdr. Amy Watkins said in a news release, a vehicle driven by Christopher David Dery, 22, “exited the highway traveling at speeds too fast for road conditions, which at the time were wet from a light rain.”

Officers reportedly evaluated Dery at the scene, and he was arrested for suspicion of drunk driving, Cmdr. Watkins said.
It took about an hour to clear the scene, blocking traffic in both directions. In the photo, police investigate the crash scene; firefighters and tow trucks then worked to clear the scene (photo courtesy MBPD).

Readers are advised to be careful driving, as rainy weather after it being dry for so long, can make for slippery roads and hazardous driving conditions. You should make sure your tires are properly inflated, your brakes are good, and you have good wiper blades, as winter appears to be upon us.
Wear your seatbelts, don’t speed, and, perhaps most importantly, don’t drink and drive.