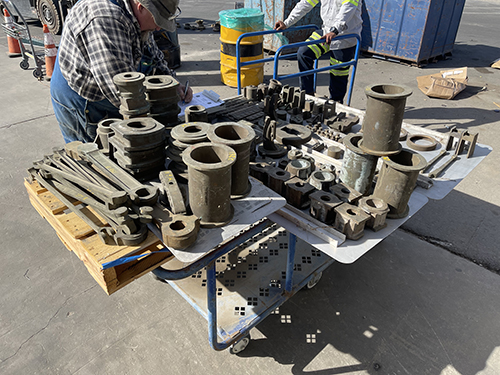 Train parts and farm equipment were allegedly stolen from a ranch in rural Santa Margarita.

Sheriff’s investigators arrested a Paso Robles man after he allegedly stole tens of thousands of dollars worth of bronze parts off a historic train plus thousands more in equipment from a ranch in rural Santa Margarita.

According to Sheriff’s spokesman Tony Cipolla, a deputy responded to a reported vandalism at 8 a.m. Monday, Oct. 11 at the Santa Margarita Ranch, in the 9000 block of Yerba Buena Ave., in Santa Margarita.

“It was reported numerous items were stolen,” Cipolla said in a news release, “including multiple pieces of a steam locomotive train, which were made of solid bronze and valued at more than $10,000.”

While bronze has value as scrap metal, the steam train parts are rare. “These train parts are extremely rare with only eight sets of them made,” Cipolla said. “One set is in New York, the other seven are in California including the one set that was taken from Santa Margarita Ranch.”

The thief or thieves stole some valuable equipment too. “In addition,” Cipolla said, “two generators, drones and other equipment were taken with an estimated value of approximately $20,000.” The estimated total loss was $30,000.

Sheriff’s investigators including some from the North Station (in Templeton) and the Rural Crimes Unit developed evidence including a possible suspect. On Oct. 20, a search warrant was served at a home in the 3000 block of Bridle Trail Ln., in rural Paso Robles.

Deputies arrested Jacob Scott Johnsen, 33, for suspicion of grand theft and receiving stolen property. He was booked into County Jail.
Bronze is a manmade alloy that is typically 80% copper and the rest tin, according to the website: forscrap.com, which bills itself as a green recycling company. “The properties of bronze put it in high demand as it is employed for a variety of purposes,” according to the website. “Of course, architecture and sculpture have been the main uses of bronze for hundreds of years. However, in our industrial and high-tech world, this alloy finds its use in manufacturing of bearings, machinery parts and tools.”

The current price for recycled bronze is from $2 to $2.50 per pound and fluctuates depending on how much copper is fetching, according to forscrap.com.