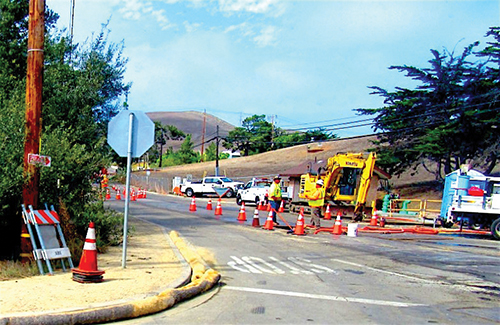 Another major water leak has sprung forth on Quintana Road, owing to construction activities, according to the City of Morro Bay.

The City’s Oct. 10 “Hot Topic” news release, said, “Quintana Road from La Loma to South Bay is closed to through traffic due to a water leak that developed during construction activities this morning.”

The leak, was in a water main lateral near the intersection of Quintana and South Bay Boulevard. The news release didn’t say exactly where the leak happened or how many water customers were affected but the only water laterals in that area service a mobile home park, a church, and a small subdivision.

The City’s contractor is Anvil Builders, which has been installing the 3.5-mile conveyance systems of pipes and pumps for the Water Reclamation Facility or WRF, a $160 million project.

In photos sent to EBN by a reader, Quintana Road is shown closed at La Loma Street. Our reader tells us there was no advanced warning, as the City had pledged to do with such closures.

The “City’s WRF website doesn’t show a detour for today,” our reader said. “That webpage says, ‘The City of Morro Bay is committed to ensuring you have up-to-date information about construction activities for the Water Reclamation Facility (WRF) and WRF Pipelines.’ Do they really mean that?”

The WRF is the largest, most expensive public works project the City of Morro Bay has ever done.

The project began in Spring 2020, and is now largely completed. During a recent tour of the new WRF treatment plant, the project manager said they planned to start accepting raw sewage at the new treatment plant on Oct. 4.

City Manager Scott Collins said they started seeding the treatment plant’s bio-digester tanks with microbes on the 4th, and last week they were continuing with testing of the lines.