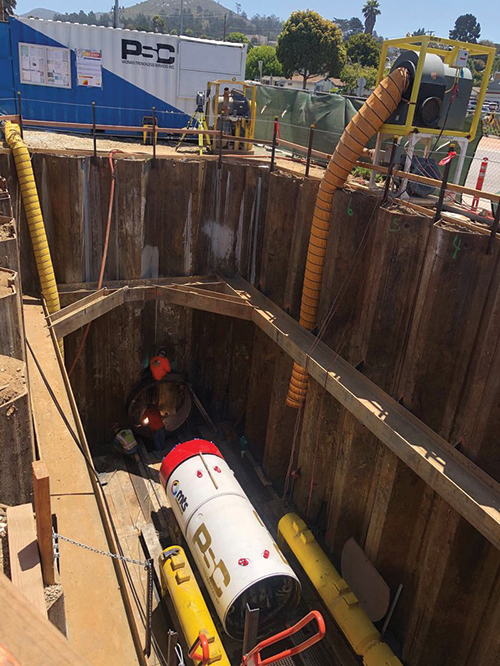 Above, a birds-eye view shows the tunneling work at the former U-Haul Store site on Quintana Road. The WRF project will tunnel underneath the Roundabout, connecting with the other end of the tunnel on Las Tunas Avenue. Photo courtesy City of Morro Bay

Work on the conveyance system of pipes for the Morro Bay Water Reclamation Facility project continue up and down Quintana Road with the work now affecting access to a dedicated bike lane.

The City said in a news release that the bike lane running from Main Street to Atascadero Road, between the Hwy 1 fence and the eastern edge of the power plant property, is now closed for “several months.”

Bicycle and pedestrian traffic is being detoured up to Main Street to get into Downtown, which would mean high school kids riding bikes or walking to school would have to use Main Street.

Laying the array of four new pipelines — two raw sewage pipes, a treated water return/recycling pipe and a wastewater discharge pipe — will be done in segments, the City said, and will include trenching and tunneling work.

Construction will be on weekdays but the bike lane will be closed full time.

In other WRF pipeline news, work on a side pipeline going from the City’s Lift Station 2 (LS-2), located under the Front Street parking lot by the Maritime Museum has begun. The City is putting in a sewer main line that will bypass the existing sewer main that collects along the Embarcadero and Downtown and also drains the Morro Heights neighborhood, nearly half the town.

The City will run that main line through the power plant property and hook up with the other sewer main being installed between Atascadero Road and Main Street (the bike lane), and into a new lift station going in on Main Street next door to Lemos Ranch store. Work on that lift station has been going on for months.

Meanwhile, construction along Quintana Road is now nearly up to the Roundabout, where they plan to tunnel underneath the busiest intersection in town, coming up on Las Tunas Avenue near the Morro Bay Coffee Co., and Las Tunas Pocket Park.

You must access the coffee company either from Balboa Street (off Kings Avenue), or form the other side through the Roundabout.

The contractor, Anvil Builders of San Francisco, have also started trenching on Quintana from La Loma Street towards the Roundabout, making a turn at Las Tunas to hook up with the Roundabout tunnel. “The eastbound lane on Quintana Road is open,” the City said, “and the westbound lane is closed to traffic except for access to business driveways.”

To access the Perfect Union pot store, patrons can take Kings Avenue, down to Quintana and avoid the construction zone entirely.

Properties along the construction area, the City said, will receive printed notices before work begins near their address, and construction notices will be regularly posted online at: www.morrobaywrf.com. Residents can email wrfinfo@morrobayca.gov or call 877-MORROBAYH2O with questions about the City’s WRF project, and they promise “a team member will get back to you within one business day.”