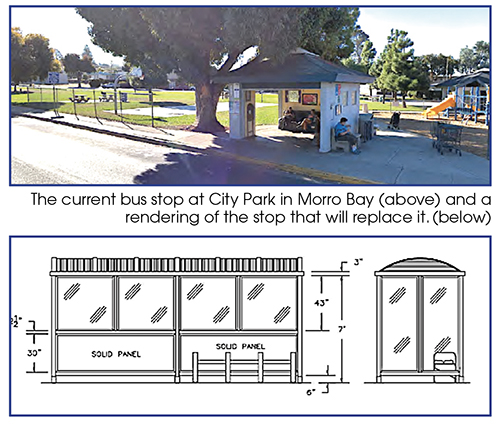 The City of Morro Bay will soon award a contract to demolish the bus stop in City Park and replace it with a new, modern-design shelter.

The City went out for bids in December and set the deadline for Jan. 12. Under scope of work the project lists: “providing all tools, materials, labor, equipment, and incidentals necessary for the removal and replacement of a bus shelter, sidewalk, driveway approach, curb ramp, spandrel, fencing, bike rack, lighting, irrigation, sign and pavement restoration.”

And, “The work will also include any required traffic control, signage, public notifications, storm water control, shoring, formwork, and all other work necessary to render the infrastructure/facility complete and operational.”

The City has been working on the project for several years now, after getting a grant. In the Public Works Department’s most recent projects list, released to the public at the October PWAB meeting, the bus shelter project is listed at $480,000.

The existing bus shelter was transformed into a public artwork by the Morro Bay Public Art Foundation about 10-years ago. The bus shelter, which is a concrete block building open on two sides, was decorated to resemble, “Grandma’s Living Room,” with original artworks painted on the walls by local artists and a concrete “leather sofa” made by an Atascadero artist. It is the most unique bus shelter in the entire county but will soon meet the wrecking ball.

In the only rendering the City could provide, the new bus shelter is depicted as a steel and plastic structure, open to the elements, and installed where the current bus shelter sits.

The City is expected to award a construction contract at an upcoming City Council meeting.

← Previous: New Harbor Director Hired With Castle Wind Out, Where Does That Leave Morro Bay? →