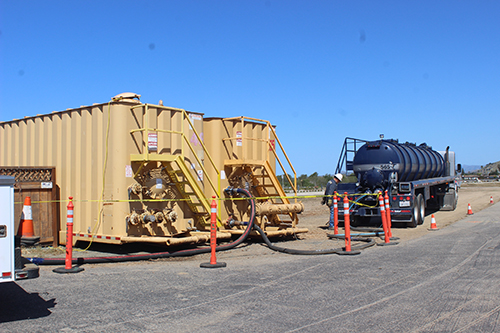 The City of Morro Bay has completed a temporary fix of a leaking forced sewer main that serves all the homes on the west side of Hwy 1 in North Morro Bay, and could include a permanent replacement of the pipe, as part of a larger project being developed for North Main Street, the City announced.

The 6-inch, “Ductile Pipe,” sewer main runs from a lift station at the Cloisters, under Hwy 1, connecting with the City’s gravity-fed sewer main that runs down Main Street to the treatment plant on Atascadero Road.

The City discovered the leak on the morning of Monday, April 11, according to the City’s Public Works Department news release. The leaky pipe, which is sight-inspected a couple of times a week, was not evident on the Thursday before the 11th and City officials believe it started leaking sometime over that weekend.

The line is crossed by a highway storm drain that empties into a catch basin and runoff system in Cloisters. An estimated 10,000 gallons of raw sewage puddled at the mouth of the storm drain and the City was able to suction up most of it with its pumper truck. Some residual icky stuff remained in the soil.

The sewer pipe dates back to 1954, which predates the City’s incorporation in July 1964, and predates the construction of Hwy 1. A robot with a mounted camera was sent through the sewer pipe and the storm drain to scope out the extent of the leak.

After being discovered, the City Utilities Division crew immediately went to work to contain and clean up the spill. They also rented two 20,000-gallon bypass tanks from Pacific Petroleum of California, based in Santa Maria.

The storage tanks accepted the sewer flow from the lift station and then loaded it onto tanker trucks, which trucked the sewage back around Main Street and emptied it back into a sewer manhole. The bike lane has now reopened.

On April 27, the news release said, a contractor pushed a 4-inch “High Density Poly Ethylene” pipe inside the leaking 6-inch line, and returned the line to service.

The bypass system was costing the City some $10,000 a day and while the City didn’t say how much it had cost them, having it in use from April 11-27 would be about 16 days, or some $160,000, not counting the cost of the repair, which the City said was a temporary fix.

“This is a short-term fix that will prevent any further leakages until the Utilities and Engineering Divisions evaluate and implement a long-term option to replace the force main,” the news release said. “The OneWater Plan, the City’s master planning document for water, wastewater, and storm water infrastructure, did not prioritize this force main for replacement and showed no indication it was at risk for imminent failure.

“As such, the City is considering including full replacement of the force main as part of the much larger Main Street Sewer Improvements project currently being designed.”

The sewer leak was the first big emergency test of the City’s new Public Works management team, including the Public Works Director, City Engineer and Utilities Division Manager, who have all been in their positions for less than a year.