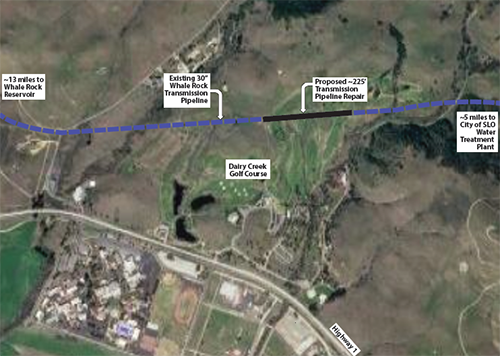 Bids are out now on a project to replace a length of the 60-year-old water line at Whale Rock Reservoir. Photo submitted

The group of agencies that own the Whale Rock Reservoir and pipeline system are out for bids now on a project to replace a length of the 60-year-old water line.

The Whale Rock Commission in April gave the green light to go out for bids on a project that would dig up and replace a 225-foot segment of the nearly 18-mile pipeline as it runs through the County’s Dairy Creek Golf Course on Hwy 1, according to a report from the Commission’s April 21 board meeting.

The Whale Rock Commission, which was formed in the 1950s and consists of Cal Poly, California Men’s Colony, and the City of San Luis Obispo, voted to authorize advertising the Pipeline Repair Project, setting a total budget of $510,000.

The pipeline runs from the reservoir in Cayucos to the City of SLO’s water treatment plant off Hwy 1 at Stenner Creek Road. “The pipeline,” reads the report, “is pressurized via gravity from the Reservoir until the pressure is required to be boosted at two pump stations, one in the town of Cayucos, and another near the Morro Bay Water Resource Recovery Facility. Whale Rock pipeline failures are uncommon but increasing in frequency as the pipeline surpasses 60 years of service life.”

With a history of increasing concerns, the Commission in 2017 hired Pure Technologies, to inspect the pipeline. “The inspection was designed to use magnetic resonance technology to identify areas of the pipeline with metal loss which increases the likelihood of pipeline failure. Inspection results documented a small number of locations experiencing abnormal pipeline degradation that were recommended for replacement and further analysis.”

That initial study led to the need for more detailed study, but that requires digging up the pipeline for a sight inspection. “When these sections are removed,” the report said, “and physically analyzed, results will be utilized to update the pipeline assessment model, which will result in a more accurate assessment of points of potential failure in the pipeline.”

Those figures are estimates from the staff engineers and the true cost won’t be known until a contract is awarded, and updated once the project is completed, as such projects are subject to potential cost overruns.

And with the replacement project, Pure Technologies will get a better handle on the condition of the rest of the pipeline.

The Whale Rock Reservoir is an earthen dam on Old Creek that was begun in October 1958 and completed in April 1961, according to a history posted on the Commission’s website. The dam was designed and constructed by the State Department of Water Resources “to provide water to the City of San Luis Obispo, Cal Poly State University, and California Men’s Colony.” (Those three agencies make up the Whale Rock Commission under SLO City staff’s supervision.)

The dam captures water from a 20.3-square mile watershed, the history said, and raw water is delivered to the agencies via the 17.6-mile, 30-inch diameter pipeline.

Because it is a drinking water reservoir, human contact with the water and all boating are prohibited. Fishing from shore is allowed under State fishing regulations. Common fish species found in Whale Rock include steelhead, catfish, bluegill, bass and Sacramento suckers.

The Whale Rock Pipeline is a so-called “bar wrapped pipeline,” made of steel pipe with a 1” thick interior concrete coating. The pipe is wrapped in half-inch rebar, rather like a Slinky, and then coated on the outside with concrete, so it’s super tough.

Still, it sprang major leaks in both 2016 and 2017, which occurred in rural areas of the pipeline’s route and so did not make the news. That’s when the Commission hired Pure Technologies for $475,000 to survey the aging line.

In 1995, the pipeline, as it runs along Panorama Drive on the eastern edge of North Morro Bay, sprang a major leak when the hillside moved. That hillside was identified as a major risk for movement during really wet winters, as 1994-95 was.

In response, the Whale Rock Commission rerouted the pipeline down Trinidad Street to Tide Avenue, and over to Nevis Street, where it was run back uphill to rejoin the pipeline as it runs southeasterly through the hills.