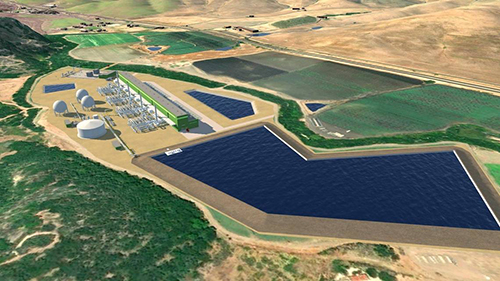 A Canadian company that is seeking to build an energy storage facility in Chorro Valley has gotten a significant infusion of cash from Wall Street for its emerging technology.

The investment is intended to support the development of Hydrostor’s “Advanced Compressed Air Energy Storage” (A-CAES) in Australia and on farmland near the intersection of Hwy 1 and Canet Road, east of Morro Bay, as well as the company’s efforts to develop the technology worldwide.

“Goldman Sachs,” the release said, “will fund its investment in tranches tied to project milestones to match Hydrostor’s capital needs and accelerate project execution throughout development, construction, and operations alongside Hydrostor’s development partners.”

CEO and Co-Founder of Hydrostor, Curtis VanWalleghem, said: “We are delighted with this investment by Goldman Sachs. It is transformational for Hydrostor and validates the competitiveness of our proprietary A-CAES solution as well as the strength of our pipeline of potential projects.”

Charlie Gailliot, partner and head of “Energy Transition Private Equity Investing” within Goldman Sachs Asset Management, said: “As the world continues transitioning to sustainable and renewable energy sources, the need for utility-scale long-duration energy storage is clear, and Hydrostor’s A-CAES solution is well positioned to become a leading player in this emerging global market. We look forward to working with the Hydrostor team over the coming years and leveraging our firm’s global platform to support Hydrostor’s growth, which will play a central role in the ongoing energy transition.”

VanWalleghem also thanked the firm’s other investors — ArcTern Ventures, Lorem Partners, Canoe Financial, and Business Development Bank of Canada, “all of whom will remain our partners. Hydrostor’s evolution has been made possible by their support and support from various agencies of the Government of Canada.

“I would also like to thank outgoing directors Elisabeth Hivon and Tom Rand for their service and welcome Charlie Gailliot, Sebastien Gagnon, and Gunduz Shirin from Goldman Sachs to our board.”

Hydrostor is focused on California’s long-term energy policies, which include being 100% carbon-free in terms of energy generation, as well as turning away from nuclear energy such as the Diablo Canyon Power Plant, which is scheduled to cease all operations in 2025, when the second of its two reactors licenses expires.

The A-CAES system, takes excess energy generated mainly by solar plants, and using it to pressurize underground storage tanks with air and water, in essence transforming the electrical energy into stored energy that can them be released gradually to turn turbines and generators and in essence turn the pent-up energy back into electricity that can be fed into the power grid over time.

The 400-megawatt, so-called “Pecho” project outside Morro Bay is being pursued through the California Energy Commission and is being timed to be ready to go online when Diablo Canyon shutters in 2025. It seeks to make further use of the high voltage transmission wires that cross Hwy 1 near the site of the proposed plant, connecting to the power grid via the substation at the MB Power Plant.

The system seeks to address one of the nagging issues with regards to solar and wind energy that the peak generation times don’t quite match up with the demand.

Storing excess energy — through battery projects like the 600MW one proposed for the Morro Bay Power Plant, as well as the A-CAES system — is seen as a way to better match up supply with demand.

Also, “A-CAES uses proven components from mining and gas operations to create a scalable energy storage system that is low-impact, cost-effective, 50+ year lifetime, and can store energy from 5 hours up to multi-day storage where needed.”