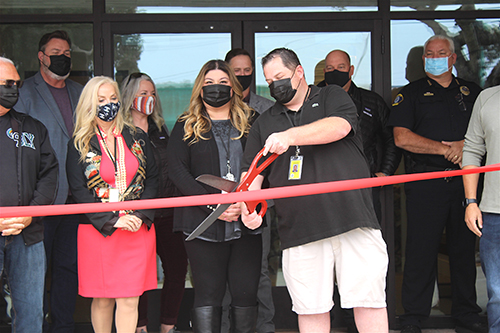 Photo from April 2021 shows Helios Dayspring with the big scissors cutting the ribbon to officially open the Natural Healing Center’s Morro Bay pot dispensary, in a ceremony organized by the Chamber of Commerce. The woman to the left of Dayspring is his reported girlfriend, Valnette Garcia, to whom he signed over his interests in the company before pleading guilty to charges of bribery and tax evasion. File photo

They lost a marijuana seller’s permit in San Luis Obispo after their founder was busted on bribery and tax evasion charges, but in Morro Bay everything was apparently hunky-dory with the process used to vet and award a marijuana dispensary permit.

The City of Morro Bay last week announced that its investigation into Natural Healing Center (nhc) and its founder Helios Dayspring, did not uncover any shenanigans in the City’s process to vet and pick the two companies that would be granted licenses to sell marijuana in the city.

Nhc and Perfect Union of Sacramento, in 2020 were awarded licenses to open cannabis retail stores in the city, with Perfect Union opening first in the 1000 block of Quintana Road and nhc opening months later at the corner of Napa Avenue and Morro Bay Boulevard.

But shortly after it opened, nhc was thrust into the spotlight when Dayspring, who grew up in Morro Bay, was arrested by the FBI and charged with bribing Dist. 3 County Supervisor the late-Adam Hill, who committed suicide in fall 2020, and to not paying taxes on millions of dollars in income.

Dayspring, who pled guilty to the charges and is awaiting sentencing, reportedly paid Hill over $30,000 in cash and supplied free weed as well, in exchange for favorable votes and lobbying for nhc’s attempts to garner permits to grow cannabis in SLO County.

The County limited the number of marijuana plantations that would be allowed in SLO County’s territory making the permits highly valuable and much sought-after.

The Dayspring-Hill scandal led to nhc being stripped of a permit for a dispensary in San Luis Obispo, as that city concluded that Dayspring lied on his application with regards to a question concerning whether there were any criminal activities surrounding the company at the time. The SLO city manager concluded that he was not truthful in the application and stripped nhc of its dispensary permit.

This came after the company sank millions into buying and remodeling a building on Broad Street that was to become the newest store. Nhc also has stores in Grover Beach, Lemoore and Morro Bay and was also planning to open a store in Turlock in Stanislaus County.

SLO’s actions left nhc holding the bag on an expensive building, unable to open and recoup its investment. The company is now suing SLO to have its license reinstated. Their store on Broad Street has never opened.

Dayspring also came under suspicion in 2018 after he hosted a private fundraiser for several local politicians, including the former mayor and a councilwoman in SLO, and in Morro Bay, Mayor John Headding and Councilwoman Dawn Addis. Some questions arose with regards to that fundraiser after Dayspring was arrested but Morro Bay’s candidates had filed the proper paperwork with regards to donations they received.

But while Hill had sway over decisions being made by County Supervisors, the Morro Bay City Council had turned the whole matter over to the staff and played no direct part in awarding the two dispensary permits, outside of passing the governing ordinance and setting the number of dispensaries that would be allowed. They also set the City’s 5% special tax on cannabis sales.

“A determination is not made by a single individual and/or body. Each step of the 3-step procedure is reviewed by a different person and/or committee. It should be noted that the City Council is not involved in any of the review and has no authority over permit issuance.”

Therefore, “The City has concluded its review and determined that Natural Healing Center-Morro Bay properly received its permit to operate a commercial cannabis retailer operation.”

Also, “The City’s internal review concluded that no impropriety occurred during the 3-step process.”

The City’s process, which was developed by the city manager and approved by the council, involved first soliciting applications, followed by a first review of applicants — there were six — by a consultant; followed by an interview process conducted by a panel of city department heads — the police and fire chiefs and finance director — who made independent recommendations to the city manager outside those of the consultant’s.

The City Manager then conducted his own review and made the final decisions on who would be awarded licenses.

Still, the seemingly comprehensive process was challenged in court when one of the companies who didn’t win a permit sued. That company, Connected Morro Bay Blvd., LLC., was the top ranked application by the consultant, but dropped down the list after the city’s panel review, and was ultimately passed over.

The City won that lawsuit in SLO Superior Court, and the decision was also used as evidence in the City’s review of nhc.

In the case, Connected Morro Bay Blvd., LLC. v. City of Morro Bay, et al., “The Honorable Ginger E. Garrett issued an order which set forth that the evidence failed to establish bias on the part of the City in favor of NHC-MB. It further found that the City and/or its officers did not violate any provision of the Morro Bay Municipal Code, or any other law, when awarding the permits,” the City said.

Also, the City’s investigation determined that Dayspring had sold his stake in the company to his girlfriend, Valnette Garcia, before they got the Morro Bay license. “The City further determined Mr. Helios Dayspring has divested himself of all ownership interest in commercial cannabis retailer operation permit holder Natural Healing Center-Morro Bay,” the City said. “Mr. Dayspring is not an employee of, and has no ownership interest in, permit holder NHC-MB.”

The City has a financial stake in its two pot dispensaries, as the projections are that the stores in Morro Bay will generate about $500,000 a year from the special cannabis tax on their sales.

So it would seem that nhc, which invested over $1 million to remodel what used to be the home of Mill’s Stationary Store, will hang on to its cannabis license for now, as the City’s licenses were initially granted for five years.