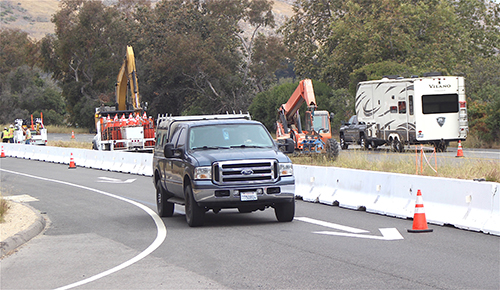 Workers with Papich Const., place K-rail blocks to divert traffic through the job site at the Old Creek Bridge on Hwy 1.

Cayucos is in the midst of an infrastructure boon, as the Town that Time Forgot is getting a lot of attention from big projects all at once.

Caltrans contractors have been busy over the past few weeks installing K-railing to merge traffic down from two lanes to one, and move the northbound lanes across the median strip onto the bridge on the southbound side at both Toro Creek and Old Creek on Hwy 1.

In addition, for several months now, nearly every street in town has been getting a slurry seal coating in a job that is now headed into the Downtown area of Ocean Avenue.

Cal Fire is still building a new fire station at the south end of town, and the Sanitary District has completed a 1-megawatt solar energy farm to power its new treatment plant on Toro Creek Road. And some time soon (we hope) the long-closed Cayucos Vet’s Hall will be rebuilt and finally reopened.

The $5.7 million Toro Creek Bridge Replacement Project contract went to Souza Engineering Contracting of San Luis Obispo and entails demolition of the northbound, concrete bridge that dates back to the 1930s and the original Hwy 1.

The bridge, which was traveled over by historic figures like William Randolph Hearst and his squeeze, Marion Davies, doesn’t meet modern standards including adequate space for bike lanes and earthquake strength.

The project will build a new, modern design bridge and is anticipated to be completed in Spring 2023, according to Caltrans.

The Old Creek Hwy 1 northbound bridge is also not up to modern snuff and is being replaced, though at a much-steeper price tag.

That project, which is near the 24th Street Beach access points, is a $17.7 million project with the contract going to Papich Construction of Arroyo Grande.

It too, is slated to be completed sometime in the spring of 2023, according to Caltrans. Both schedules will depend on the weather being cooperative.

A bicycle detour is also being established, Caltrans said, with signage near Old Creek Road and Studio Drive, as it will be very tricky — if not outright dangerous — for riders to go through the construction zone at Old Creek.

Both jobs are being funded at least in part through Senate Bill 1 (SB 1), a 2017 State gas tax hike that was to provide $54 billion over 10 years ($5.4B per year), and earmarked for transportation projects in California.

SB 1, “has allowed us to advance important projects on the Central Coast,” Caltrans Dist. 5 Director Tim Gubbins said, “and around the state, that enhance safety and mobility for all travelers.”

The access to Dog Beach might get a little tricky and readers who frequent the only off-leash dog-friendly beach just about anywhere should take extra caution entering and exiting the roadside parking areas. (It might be prudent to access the beach from North Point Natural Area on Toro Lane.)

Readers are advised to slow down through the job sites and be forewarned, traffic fines are doubled for violations in construction zones. Electronic road signs approaching the construction zones also warn of “radar enforcement.”