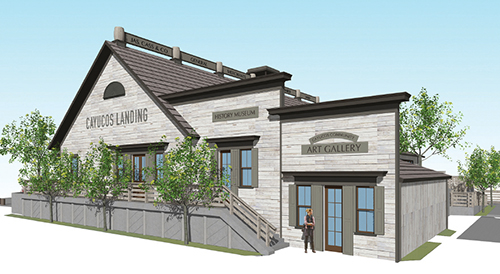 A rendering of the Cayucos Vet’s Hall that will be rebuilt in an $11 million project.

The heart of Cayucos will soon beat again, as the historic Cayucos Vet’s Hall — closed since 2016 — is finally ready to be rebuilt in a project that now tops $11 million.

The Vet’s Hall was the original warehouse for Capt. James Cass’s Cayucos Landing, a shipping port that began in the 1870s and includes the town’s other historic structures — the Cass House (now a B&B) and the Cayucos Pier, which itself was completely rebuilt after falling into disrepair.

The Vet’s Hall is actually owned by State Parks and leased to the County via an agreement that originally dates back to 1944 and includes the pier and beach.

Over the years it has become the heart of the community as a community meeting place and events venue hosting such things as the Annual Seaglass Festival, 4th of July events, the Portuguese Festival, weddings and parties, concerts and local advisory board meetings, as well as the home of Cayucos Art Association Gallery.

It was closed in 2016 after an inspection found numerous structural problems, including a rotted out floor underneath the stage and roof beams that were not properly connected to the walls.

The County closed it and except for a short time when it allowed the art gallery to reopen before being shut down again, it has been unused, however the County did set up large tents behind the Vet’s Hall by the barbecue area for the public’s use.

Culling together the millions it would cost to repair the Vet’s Hall, which as a historical landmark must be preserved in as close to original state as possible, has taken six years, and the County has received several big State grants and coupled with a huge fund-raising effort by local residents, it’s now on the verge of being fixed.

The County is holding a public ground breaking event at 2 p.m. Friday, Dec. 2 at the Vet’s Hall. And while the start of its rebirth is a cause to celebrate, the work of fundraising continues and a citizen’s group that was formed to aid the effort is kicking into second gear.

The “Restore Cayucos Vets Hall Committee” had raised and donated over $400,000 to the County’s project to help with the construction and to act as a local match for grants. It is now looking to raise additional monies to pay for new furnishings that aren’t part of the construction budget.

Committee Chairman, Greg Bettencourt, in an email said, “The Committee began fund raising in October 2021 and in the last year has raised over $500,000 for the project from well over 500 people and organizations.  Recently it pledged $435,000 of those funds to SLO County to be used for construction.

“Having committed the bulk of its funds to construction the Committee intends to raise an additional $200,000 to invest in the furnishings and equipment needed for the Vet’s Hall to function and look like the first-class venue and community center it is designed to be.”

He added that the $200,000 will be used “to purchase items such as an assisted listening system, portable stage, sound system, benches for the expanded deck, commercial microwave as well as tables and chairs to replace very worn ones kept in storage for 6 years.”

The committee is working with the Community Foundation of San Luis Obispo County and donations are tax deductible. If EBN readers are interested in helping, see: www.restorecayucosvetshall.org for information.

The Dec. 2 groundbreaking is free and open to the public.