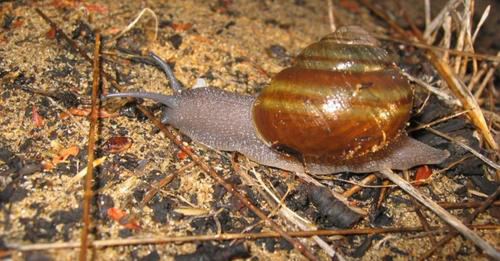 The U.S. Fish and Wildlife Service formally changed the status of the Morro shoulderband snail from endangered to threatened, citing Endangered Species Act protections that have helped spur its recovery.

Found only in Los Osos/Baywood and Morro Bay in western San Luis Obispo County, this native snail is thought to have a stable or increasing population. Based on 2018 surveys, there are now thousands of individuals. The species has benefitted greatly from protection of coastal dune and sage-scrub habitat in state and local preserves.

“This is good news for a laid-back, native SLO species,” said Jeff Miller, a senior conservation advocate at the Center for Biological Diversity and a Los Osos resident. “Like everything it does, this snail is moving very slowly and steadily toward recovery.”

The snails are named for the dark spiral band on the shoulder of their shells and are typically found in leaf litter and on the shady undersides of lower branches of native dune shrubs. They are active during rain and heavy fog but go dormant during the dry summer. Unlike invasive garden snails, they are not pests. They eat mostly fungal mycelia that grow on decaying plant matter and thus help build up soil.

The Morro shoulderband is the latest imperiled species to benefit from protection under the Endangered Species Act. It joins other Central Coast success stories like the peregrine falcon, bald eagle, brown pelican, least tern, snowy plover, California condor, southern sea otter and tidewater goby, all of whom have recovered or are on a recovery trajectory thanks to the Act.

“Recovery of this snail demonstrates that to save species from extinction, we have to protect the places where they live,” said Miller. “A bonus of saving the Morro snail is it helped in creating and protecting many of the local preserves and open spaces we all love, making life better for all on the Central Coast, from people to gastropods.”

The species was listed as endangered in 1994. A recovery plan was prepared in 1998 that identified four conservation-planning areas to focus on for habitat protection. The Center for Biological Diversity and Christians Caring for Creation secured protection in 2001 of 2,566 acres of critical habitat for the snail around Los Osos and the Morro Bay estuary. Blocks of protected and unfragmented habitat large enough to minimize the snail’s risk of extinction have since been secured in Morro Spit, West Pecho, and southern and northeastern Los Osos.

Surveys from 2000 to 2005 found more and more snails each year, in a wider variety of habitat types than previously thought. A 2006 status review by the Service concluded that the snail population was stable or increasing and had a wider range and distribution than believed at time of listing.

The snail is still designated as threatened and is not yet fully recovered. Maturing vegetation in preserves such as Morro Strand State Beach, Los Osos Oaks State Preserve, Morro Bay State Park, Montaña de Oro State Park and the Elfin Forest Reserve may require habitat maintenance and removal of invasive plants to provide long-term habitat for the snail. Recovery criteria have not been fully achieved, and some of the conservation areas still need management plans.

The Service also issued “take” regulations for the Morro shoulderband that exempt and allow native habitat restoration activities including removal of invasive species, and fire hazard reduction activities by Cal Fire and others.