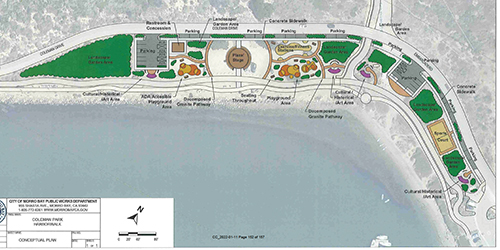 Here’s the City’s rendering of potential improvements to Coleman Park and the Harborwalk area heading out towards Morro Rock.

The City of Morro Bay is celebrating receiving two grants to address some needed public improvements, including finally replacing a public restroom in a waterfront park.

City Public Works Director, Greg Kwolek, reporting in the latest City Manager’s Newsletter, announced the receipt of a $600,000 grant from the State’s Rural Recreation and Tourism Program (RRT); and $490,000 from “Community Betterments — Safe Accessible Streets for All” program administered through the San Luis Obispo County Council of Governments (SLOCOG).

The RRT monies are going towards the Coleman park Improvement Project, which if fully implemented, bring great changes to Coleman Park and the entire Harborwalk area out to Morro Rock.

“These funds will be used towards the creating of a trail, stage/plaza space, playground with an accessible play equipment option, an exercise station, non-invasive landscaping, educational panels, as well as supplementing the previously awarded Per Capita Grant to replace the former restroom with a 4, single occupant restroom structure, drinking fountain and parking,” reads Kwolek’s announcement. “This grant will also support the addition of potentially four cultural/historical installations at Coleman Park.”

Back in January, when the City Council approved applying for the RRT grant, according to the meeting minutes, its stated support was for: “consolidated, accessible parking and parking along Coleman Drive provided it can be done safely; removal or relocation of basketball court; a plaza or stage for small events; continued access for kayakers and stand-up paddle boarders; additional lighting, tables and barbecues; dune landscaping; new cultural resources and preserving current monuments at same or different location; and, addition of a second public restroom.” That motion passed unanimously.

There was pushback from former councilwoman and current council watchdog, Betty Winholtz, who said she preferred the basketball court and parking areas remain in their current locations. She opposed having a stage in this area and favored more passive recreation with children’s play equipment.

The City, in October 2021, held two public workshops to gather input on what changes people would like to see at Coleman Park. That sand covered play area has never had much there — just a swing set, a bathroom (torn down long ago), a picnic table and outdoor basketball court, which was put in after the original skateboard park apparatus was moved to the Atascadero Road Teen Center (soon to be a Boys & Girls Club facility).

The conceptual design, at least the third time it’s been proposed for redevelopment, is a dramatic difference from what exists today, a mostly undeveloped sandy area, with a scattering of dune plants.

The newest design would turn several mostly natural areas into landscaped gardens, move the restrooms and install paved parking areas. It would also increase the available parking spots from 32 to 33, according to the report.

This concept must still be formally organized into a project that the City can then apply for a Coastal Development Permit from itself, undergo a full public hearing process and ultimately have to be approved by the Coastal Commission, as that area is in the Commission’s jurisdiction.

That process can be lengthy, as it was when the City built the Harborwalk, and subject to potential changes the Commission decides to make.

Among the potentially most controversial features could be the addition of a concert stage in the midst of what is now a mostly quiet, leisurely stroll along the bay for residents and visitors.

Meanwhile, the SLOCOG grant, “will increase the scope and effectiveness of the City’s budgeted project for ADA Accessibility and Safety Upgrades” at the signalized intersection of Main Street and Quintana Road, reads the announcement.

The proposed improvements include: upgrading the curbs, ramps and sidewalks to current ADA standards; install audible push button and pedestrian heads (crosswalks that speak to pedestrians); explore and implement signal modifications for bicycles, bicycle crossing or push buttons from the Class II to the existing Class I (separated) bike path and upgrade the traffic signals; improve the striping of the crosswalks; and repaving the intersection to match the new ADA improvements.