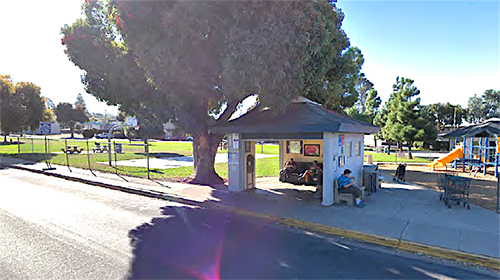 The City of Morro Bay is asking for proposals from engineering firms for its project to redevelop the bus stop in City Park.

The City released its request for proposals (RFP) July 22 with a deadline of Aug. 19 for proposals to design improvements to the sole transit hub in town, where both the City’s and the County bus systems come together for transfers to SLO/Los Osos and north up Hwy 1. School buses also drop off and pick up school children at the same location.

“The public transit service is an important element of Morro Bay’s mobility network,” the RFP notice said.
The City conducted a study in early 2019 by LSC Transportation Consultants, Inc., and Auerbach Engineering, Inc., that came up with three options: move the bus stop from Harbor Street to Morro Bay Boulevard; build a new bus stop further up Harbor Street from the current location; and tear down and replace the bus stop where it now exists.

The City Council rejected moving to the Boulevard and settled on replacing the existing bus stop where it is.
That bus shelter art project was funded by the City, Regional Transit Authority, and several private doors, and facilitated by the Morro Bay Public Art

Foundation, turning it into “Grandma’s Living Room,” a nearly $10,000 redesign that made the interior resemble a living room, complete with a lumpy couch (made of concrete), and original artworks that include an old style radio, a phone booth and several original paintings done by local artists on the walls.

A staff report regarding the Transit Hub Study said, “The consultant has noted that while the existing stop is attractive and functions reasonably well, there are several deficiencies that could be addressed in an improved Transit Hub.”

Among the improvements is a desire for waiting passengers to be able to better see buses coming up the street and in turn drivers to see passengers; inadequate seating inside and out; having just one area where the sidewalk is 8-feet wide for wheelchairs; a lack of “real-time” transit displays; bad lighting; and it’s “located on a low-volume street with trees blocking the view from busy Morro Bay Boulevard, the existing site does not provide good visibility of the transit services to non-transit riders so as to alert the non-transit riders to the available service,” along with a couple of other minor points like adding bike racks and enough benches to accommodate up to 30 passengers at a time.

One of the features for a new bus stop would be a private area where bus drivers would be able to take breaks away from the public, and a small space for “public art.”

It also noted that there needs to be electrical service and Internet connection for a system that would allow people to track where buses are in real time.
The cost estimate back in 2019 was $489,000, which the City was hoping to mainly get funded through a competitive State transportation grant and through it’s normal transit funding.

Whichever engineering firm gets the contract will have to create construction plans, specifications and a cost estimate, “in order to produce a ‘ready to list’ bid package for the final project installation,” the notice said.

As for how much the contract for professional services might cost, the City notice said it was negotiable.