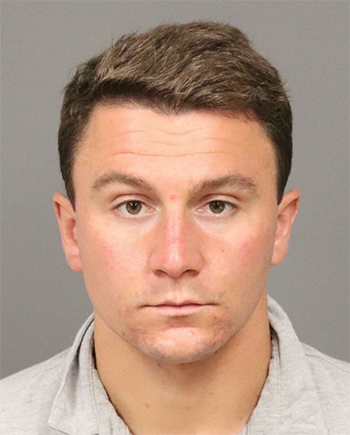 A former Morro Bay High School teacher and swim coach has been sentenced to jail for having sex with an under-aged female student and for inappropriate messaging with another minor, female student.

D.A. spokesman Eric Dobroth said Andree agreed to a plea agreement in June, after he was arrested by Morro Bay police last January, following a tip about the victim that came from someone in Washington State.

The case began last Jan. 11 when MBPD’s school resources officer, Gene Stuart, got an anonymous tip from a woman in Washington State. “The investigation led detectives to identify a possible victim and suspect,” MBPD Cmdr. Amy Watkins said at the time. “Detectives located and contacted the believed parties involved, which generated a more in-depth investigation into the misconduct by Andree.”

The police and San Luis Coastal Unified School District apparently both were tipped off on the same day.
“SLCUSD received information on Monday, Jan. 11,” the District said in a Feb. 8 news release, “informing us of allegations of potential misconduct indicating a teacher/coach had an inappropriate relationship with an unnamed student during his employment. SLCUSD commenced an internal investigation.”

Police said their investigation included interviews with the victims and the serving of search warrants. Police legwork identified two victims, both were seniors and both girls. They arrested Andree on Feb. 8; but he had already resigned.

Dobroth said the tipster also said that the victim was now over 18 and had graduated from MBHS in 2020.
“The reporting party,” Dobroth said, “was not willing to identify the teacher or victim by name. This prompted an investigation that led to identifying teacher and swim coach Tyler Andree as the suspect.”

Because the investigation didn’t start until January 2021, Dobroth said there was a lack of “forensic cyber evidence” that could pinpoint when the tryst occurred. In California, he explained, it is not illegal for a teacher or school official to have sex with someone who is over 18.

Later in 2020, Dobroth said, Andree “also engaged in sending inappropriate messages communicating explicit sexual intent with another 17-year-old female student. This conduct formed the basis for the felony conviction of communicating with a minor with the intent to commit a specified sexual crime.” Such messaging has been given the label, “sexting.”

Superior Court Judge, Michael Duffy, approved the plea agreement that was reached June 9 and handed down his sentence just last week.
“The terms of the agreement,” Dobroth said, “ensured that the defendant would be held accountable for his actions without subjecting the two young women to testifying in court and enduring the additional mental anguish of cross-examination by a defense attorney.”

In the U.S. an accused person is guaranteed the Right to a fair trial and to confront his accusers. By pleading guilty, Andree forfeited those Rights, and accepted punishment for what he did.

His sentence includes formal supervised probation, but for a limited time. “It is important to note,” Dobroth said, “that in 2020, the California Legislature passed Assembly Bill 1950 that limited the length of felony probation to a term of 2 years for these offenses.”

Though it is not a crime under California law for a teacher to have sex with a student who is over 18 and legally an adult, Dobroth said there have been efforts to change the law and further protect students.

“In 2012,” he said, “the California Legislature rejected Assembly Bill 1861, sponsored by Assemblywoman Kristin Olsen, representing Stanislaus County, that would have made it a felony crime for any teacher or employee of a public or private elementary or secondary school who engages in a sexual relationship or inappropriate communication with a pupil of any age.”

Dep. D.A. Danielle Baker, who is assigned to the Sexual Assault and Child Abuse prosecution unit, handled the case and was supervised by Chief Deputy District Attorney Lisa B. Muscari. The District Attorney said he would continue to try and protect young people of SLO County.

“There is no safe haven in San Luis Obispo County for people in positions of trust who take advantage of those who they are responsible to protect,” said D.A. Dan Dow. “This conviction will rightly ensure that Tyler Andree is never again allowed to coach, teach, or be in a position of care for children.”