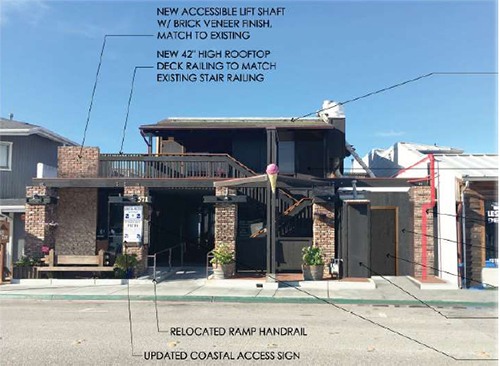 Plans for the converted Salt Building on the Embarcadero.

The Morro Bay City Council has approved converting a mostly unused second story office space on the Embarcadero into a vacation rental unit, plus new docks, and widening of the Harborwalk at the Salt Building.

The project also proposes a 450 s.f. lease line amendment in the water lease area. That’s where two damaged finger slips (floating docks), would be removed and replaced, with a new gangway installed and widening of the Harborwalk from the current 8-½ feet to 10’ in width with one area expanding out to 21 feet. The expansion will require a couple of additional pilings, too.
There will also be improvements to the front façade of the HMS Salt Building, located at 571 Embarcadero, which was designed and built in 1971 by architect, the late-Jim Maul.

The Salt Building was the original home of The Hofbrau and currently is home to the Beach Burgers Restaurant, a small coffee shop and ice cream shop. There are a handful of boats docked there too.

The HMS Salt Building is one of the more unique and charming buildings on the waterfront.
Also as part of the project is the installation of an elevator to meet ADA requirements for the second story rental.
Though it might seem a simple project, given it’s location on a State Tideland’s lease, it’s anything but simple. “The project is in the Commercial Visitor-Serving (WF/PD/S.4) zoning district and is located in the Waterfront Master Plan (WMP) and the Downtown Waterfront Specific Plan (DWSP) areas,” reads Jacinth’s report. “The project is also located within the Coastal Commission Original Jurisdiction, which has permitting authority for the related coastal development permit.”

Back in April, the Planning Commission unanimously approved the project. It automatically went to the City Council as all CDPs do, and now goes to the Coastal Commission. It was actually the planning commission’s second bite at the apple for a project there.
“The PC initially reviewed the CUP amendment on Dec. 18, 2018,” the report said, “and added five project conditions primarily related to restoring the building as much as possible to the original Jim Maul architecture. However, the 2018 project did not move forward to City Council for final CUP approval due to Building Code challenges related to ADA accessibility with the proposed lift and the second floor uses.”

That first project asked for two upstairs units and when it came back, it was reduced to just one and an elevator put in to meet the ADA requirements, according to the report.

The relatively small Harborwalk expansion — going from 8-1/2’ feet to 10’ wide — is another example of an issue that the Waterfront Master Leaseholders has raised with the City’s general plan/local coastal plan update process that is wrapping up now on the City level.
The issue is that for years the City had developments install the Harborwalk along the waterside of the Embarcadero with an 8-feet standard.

But with recent projects — namely the rebuilding of the seawall and docks at The Boatyard Center, and the conversion of Rose’s Landing’s second story into Rose’s Landing Inn — the Coastal Commission required existing Harborwalk segments be expanded to 10 feet, which the WML argues is a great expense that while providing a public benefit, brings little benefit to the businesses who must pay for it.