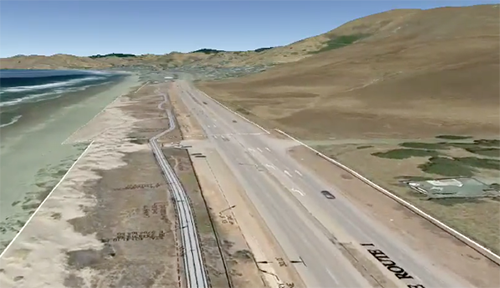 A screen shot of a video posted by SLO County shows the route of the proposed Morro Bay-Cayucos Connector Trail, a dedicated bike path on the west side of Hwy 1 overlooking the beach. See the whole video at: vimeo.com/245606835.

There’s hope on the horizon that funding for a much anticipated beachside bike path after a site visit from a major funding source and the application for a third multi-million grant.

San Luis Obispo County agencies have been working for man years on the so-called “Morro Bay-Cayucos Connector trail” a dedicated bicycle path paralleling Hwy 1 from Morro Bay’s North Point Natural Area to the south end of Studio drive, around 4 miles. The Connector path would run along the top of the bluff west of the Hwy 1 fencing.

County Planner, Elizabeth Kavanaugh updated Estero Bay News readers on their progress. “We have heard from the Proposition 68 grants through State Parks that we applied for in January,” she said in an email. “We received a site visit from their representative last month and she enjoyed the walk along the bluffs and view. We will hear about those two grants by the end of the year.”

According to the State’s official website: Prop. 68 is “the California Drought, Water, Parks, Climate, Coastal Protection, and Outdoor Access For All Act of 2018.” The $4.1 billion bond has already seen some $3,8 billion committed to projects throughout the state and some $281 million still to be awarded.

But grant writing especially for a competitive grant process that’s focused on deferred maintenance projects, is iffy at best. So the County is seeking money from another source. “On Wednesday [June 15],” Kavanaugh said, “we applied for an ‘Active Transportation Grant’ through the California Transportation Commission for the full cost of construction of $6,656,488. We will hear from them hopefully at the end of the year.”

EBN asked what the strategy is for the connector trail — will they wait until all funding is in hand or possibly finance the project through a capital improvement bonds the County is seeking to issue that would cover several large projects — a new $34 million Probation Department Office (out for bids now) and Cayucos Vet’s Hall rebuilding are two that have made the list so far.

“Our strategy,” Kavanaugh said, “is to keep applying for grants for this trail until we get the money to construct. This project is not included with the bond financing being done for the Cayucos Vet’s Hall and the Probation Department.”

The County’s roads monies funding agency — San Luis Obispo Council of Governments (SLOCOG) — is on board.

“The County,” Kavanaugh said, “received $650,000 from SLOCOG to finish up construction drawings and completing the right of way process with Caltrans. SLOCOG continues to be very supportive of this project.”

She said the connector trail would be a 12-foot wide, smooth surface trail. It will be completely separated from traffic on Hwy 1, “to ensure the safety and increased pedestrian and bicycle use in the area. Existing coastal access points will be protected.”

The path will need dozens of little “bridges” spanning the numerous cuts in the bluff, some caused by erosion. It will also need a larger bridge to span Toro Creek, the major hurdle on the entire route.

The whole area between Morro Bay and Cayucos, which includes the Chevron Dog Beach, and the Chevron Marine Terminal lands, is actively being sought by a group of several local entities — the Trust for Public Lands; the Cayucos Sanitary District; the Cayucos Land Conservancy; the Land Conservancy of San Luis Obispo County; Morro Bay Open Space Alliance; State Coastal Conservancy; and San Luis Obispo County — to purchase and bring the vast mountainous ranchlands under public ownership and conservation.

So far they’ve purchased Dog Beach — the only beach in SLO County where dogs are allowed off leash (dogs are banned entirely on all State Parks beaches and the City of Morro Bay’s beach at Morro Rock only allows dogs on leash).

Dog beach was purchased by the Cayucos Sanitary District and ended up in the City’s hands. Morro Bay has pledged to keep it open to dogs in perpetuity.

The Cayucos CSD and County have also purchased another slice of the old terminal lands on the east side of Hwy 1, which the District needed for a new lift station and piping down Toro Creek Road to its new sewer treatment plant. The entities are now negotiating to buy the main ranchlands that lay east of Del Mar Park in what promises to be an epic conservation of hundreds of acres of valuable coastal lands.

Kavanaugh said the County started a Survey Monkey poll to whip up support for the connector project, see: surveymonkey.com/r/KFWRFDF. The survey has been up for some time and the strategy is to keep it going, because the results are bolstering the grant applications.

“The data was very helpful in the most recent grant application,” Kavanaugh said. “Feel free to direct folks to it.”

The County has also posted online a cool flyover video of the route the connector path will go. It appears to be drone video. See: vimeo.com/245606835.