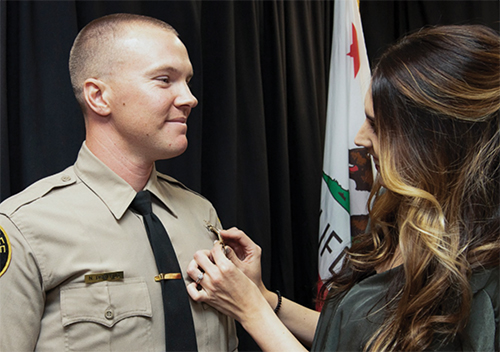 Sheriff’s deputy, Nicholas Dreyfus, 28, has his badge pinned on by his wife upon joining the Sheriff’s Department in October 2018. Photo courtesy SLOSO

A transient man from Monterey on an apparent killing spree who opened fire on police in Paso Robles, severely wounded one deputy and injured three others participating in a massive manhunt, was killed by law enforcement after a near 2-day search.

According to Sheriff’s spokesman, Tony Cipolla, the disturbing events started about 3:45 a.m. in the 900 block of Park St., at the Paso Robles Police Station.

“Staff on duty at the Paso Robles Police Department,” Cipolla said in a news release, “observed a male subject outside their building who was armed with a firearm. The suspect began shooting at the police building.”

Paso PD requested Sheriff’s and Highway Patrol assistance but when officers arrived on scene the gunman started shooting at them. A Sheriff’s patrol with two deputies was among them, searching for the suspect in the Downtown area.

“At approximately 4:19 a.m.,” Cipolla said, “the two Deputies were searching the downtown area when they came under fire from the suspect. One of the deputies was shot in the face by the suspect. The second deputy returned fire at the suspect. This Deputy then grabbed his wounded partner and removed him to a position of relative safety where he rendered medical aid.”

The wounded deputy, later identified as Nicholas Dreyfus, 28, who started with the Sheriff’s Department in October 2018 and works out of the North County Sheriff’s Station in Templeton, was shot in the face, Cipolla said, and was flown to a trauma center out of the area where he underwent surgery.

“The surgery was successful,” Cipolla said. “He is listed in guarded condition and his prognosis is good. Dreyfus is married. His wife and family members are with him as he recovers.”

The suspect was identified as Mason James Lira, 26, a transient from Monterey with a long, violent criminal history. Lira eluded capture and a search began with the assistance of numerous agencies.

With the manhunt in full force, at 7 a.m., Paso Robles police received a report of a dead body near the train station. The body was determined to be a 58-year-old transient man and Coroner’s Investigators determined that he had been murdered. He is suspected to be a victim of Lira’s spree.

With the entire county on alert and a manhunt underway, the search lasted into the early afternoon of June 11.

According to Cipolla, “at approximately 2:10 p.m. the Sheriff’s Office received a report of an officer shot in the area of Ramada Drive and Volpi Ysabel Road in Paso Robles. Law enforcement officers were stationed in this area as part of a containment team assigned to keep the suspect, Mason Lira, from evading officers who were beginning a search of the riverbed.”

Officers were able to pull the wounded officer away, and he was taken to a local hospital. “Officers arrived at the scene and conducted a search for the suspect,” Cipolla said, “when the suspect opened fire on the officers, wounding two of them. These officers were also evacuated and transported to local area hospitals for treatment. Officers continued their search for the suspect along the Salinas River when they encountered Lira, who had been hiding in the riverbed.”

Lira tried to flee and headed towards Hwy 101 through a vineyard when he was shot and killed by officers.

Lira’s crime spree took a toll on law enforcement with four being shot and wounded in the exchanges of gunfire. Cipolla said the officers shot on June 11 were with the Highway Patrol, the Arroyo Grande Police Department and the Kings County Sheriff’s Office. The officers were taken to a nearby hospital with non-life threatening injuries.

According to KSBY-TV report, Sheriff Ian Parkinson said Lira had a box of ammunition with him when he was killed and more ammo was found by a maintenance man in a hidey-hole beneath the movie theater in Downtown Paso Robles, where police believe Lira had been camping.

Sheriff Parkinson said the FBI investigated the hideout and items linked to Lira were reportedly discovered.

“Authorities believe Lira had been staying at that location for the past several days and may have been in the area for up to a week,” according to KSBY.

Lira has an extensive criminal history, having been arrested several times in at least three counties — Monterey, Santa Cruz and Tulare. He’d been released from Monterey County custody June 3.