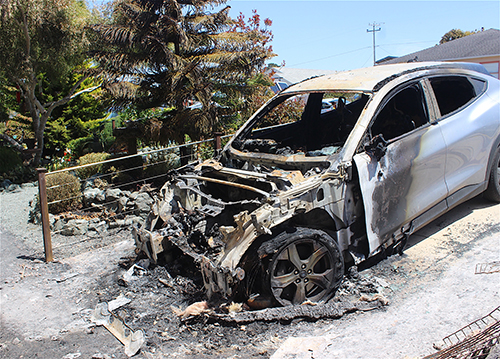 No one was injured in spectacular blaze on April 23 that heavily damaged a home at 510 Bernardo Ave., in the Heights Neighborhood of South Morro Bay.

The house is the home of Frank and Laurie Sances. Laurie Sances had just gotten home and was in the backyard working on a deck project when she realized there was a fire.

She told Estero Bay News that when she got home at about 6:20, there was no smoke. But a few minutes later, at about 6:35, she noticed smoke and walked around the side yard to find the garage ablaze, with flames shooting into the sky.

“It was spontaneous and very violent,” she said of the blaze that included a number of explosions and blew out the garage side window to scorch the side of her neighbors, Jerry and Nancy Weber’s, home.

Jerry Weber said the fire blew out the garage window and against his home “Like a blow torch.”

The fire blackened the siding and blew out a window next door. Weber said the fire department estimated the damage to his home at $100,000, but they had not yet gone through the insurance process and hoped there wasn’t a lot of hidden damage.

The fire also spread out of the open garage door catching the Saunces’ 2022 Ford Escape SE hybrid, plug-in car on fire. The Ford was not plugged in when the fire happened and while the front end was essentially melted off, the car’s lithium ion battery thankfully did not catch fire.

Laurie Sances said she ran into the house when she saw the fire to get her phone and dog, and noted there were a series of explosions caused by the fire.

She tried to run out the front door but it was blocked and so she went out the back and eventually they found their dog safe and hiding in fear in the backyard.

She said she ran around the side of the house and then realized she had her purse, keys and cell phone in her hands. “I didn’t even realize I had them,” she said of the chaos and commotion the fire ignited.

Nancy Weber went outside her house, saw the fire and called 9-1-1. She was still a bit shaken two days later but was very thankful that no one was hurt.

Morro Bay Fire Chief Daniel McCrain said he was at home in North County when he got called in to the fire at 6:50 p.m. When MBFD arrived within minutes, it was an “active fire,” he said. He said the initial reports were of a structure fire with an electric vehicle involved, too.

Firefighters knocked the fire down quickly, the Chief said, and spent several hours mopping up the fire, opening up the walls to make sure the fire was completely out. They also had to cut holes in the roof to fight it. Neighbor Jerry Weber noted that firefighters used a lot of foam to fight the fire, which is normal with potential lithium battery fires.

Chief McCrain said the department’s fire investigator, along with SLO Fire Investigation Strike Team (SLOFIST), were investigating the cause of the fire, but they were sure it started in the garage.

There was a lot of stuff in the garage, he said, which made it a tough fire to put out, as is often the case with garage fires. Garages are particularly tricky fires, he explained, as they are where people store the normal household stuff, like cleaning products, gas cans, paints and anything they don’t want to store in the house.

Firefighters were able to contain the fire mainly to the garage and saved the majority of the Sances’ home. They estimate damage at between $200,000-$300,000.

“There was minimal fire damage to the main part of the house,” Chief McCrain said. But it did sustain smoke, heat and water damage and will need extensive cleanup and repair. The Weber’s home, while scorched on the outside, also sustained some heat and smoke damage.

MBFD was assisted in fighting the fire by Cal Fire crews from Cayucos and Los Osos.