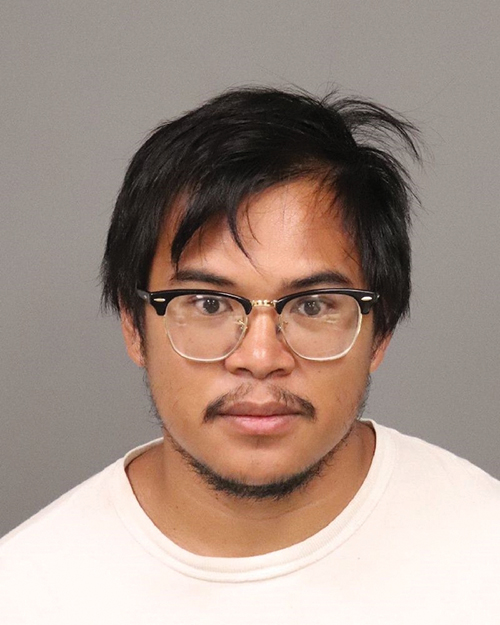 A Cambria man was arrested for suspicion of sexual assault, burglary and auto theft, after he allegedly attacked a woman inside her home, in a strange case involving several home invasions.

According to Sheriff’s spokeswoman, Grace Norris, the Sheriff’s got a 9-1-1 call at 4:30 p.m. Sunday, Sept. 4 os an attempted sexual assault in the 2400 block of Wilcombe Rd., Cambria. Responding deputies found an adult female victim, who was not identified in the news release.

“The victim,” Norris said, “reported she was in her home when she found an unknown male, later identified as 29-year-old John Michael Ludwick, standing in her living room.”

Ludwick reportedly grabbed the victim, “and made a sexually explicit statement,” Norris said, giving no further indication of the man’s exact words. “The victim was able to run out of the house and to a neighbor’s residence.”

Norris said the suspect “appeared to follow the victim,” but then he walked away. It apparently wasn’t his first invasion of the woman’s home. “Through the investigation,” Norris said, “deputies discovered Ludwick had entered the victim’s home earlier that day, stole her credit card and took her vehicle.”

This strange tale took an odd twist. “Ludwick then returned the vehicle and the credit card when he encountered the victim and attempted to sexually assault her,” Norris said.

This wasn’t Ludwick’s first home entry. “Further investigation,” Norris said, “revealed that Ludwick had entered a different home the previous day, [Sept. 3], in the 2400 Block of Banbury Road in Cambria. The home was empty at the time he entered, however, the residents returned home and confronted Ludwick.”

He was apparently not very intimidating. “Residents did not believe Ludwick was a threat,” Norris said, “and did not report this incident to the Sheriff’s Office. Ludwick then returned to the same address on Sept. 4 at approximately 11:30 a.m., however the residents were home and told him he needed to leave.”

Ludwick was arrested after the incident on Wilcombe Road and booked at the San Luis Obispo County Jail for suspicion of “assault with attempted sexual assault with attempt to commit a felony; two counts of burglary; Vehicle Code 10851 driving a car without consent; receiving stolen property, and illegal use of access card unlawfully obtained.”

The Sheriff’s Office is asking for the public’s help identifying any additional unreported incidents involving Ludwick, “as well as any surveillance footage from Sept. 3 to Sept. 4, 2022. Contact the Sheriff’s Detective Division at (805) 781-4500 with any information. Anonymous tips can be submitted to Crime Stoppers by calling (805) 549-STOP (7867) or on their website: slotips.org.