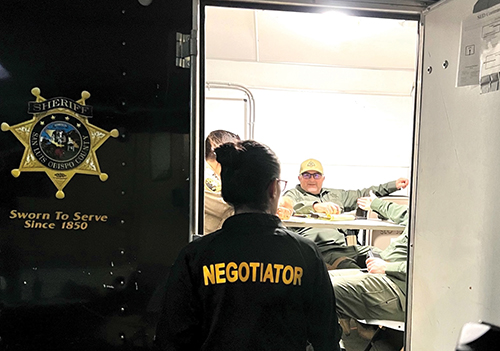 John Michael LudwicPhoto shows a Sheriff’s Department negotiator and the command and staff assembled during a standoff with a Pismo Beach woman, involved in a hit and run and child endangerment case on Sept. 2. Submitted photo

A Pismo Beach woman was arrested for suspicion of child endangerment and assault with a deadly weapon, after a car chase and standoff in Pismo Beach, the Sheriff’s Office said.

According to Sheriff’s spokeswoman, Grace Norris, the incident started at about 3:45 p.m. Friday, Sept. 2 in the 6000 block of Hwy 1 north of Cayucos with a report “of a woman trying to run over a child with her car,” Norris’ news release said.

The 9-1-1 caller reportedly knew the woman and identified her as deputies responded. Initial reports were apparently inaccurate.

“While en route,” Norris said, “it was determined that the suspect had actually rammed a vehicle occupied by an adult male and a juvenile. The victims and suspect left the location prior to deputy arrival.”

Deputies immediately began an investigation and search for their suspect, who they were told lived in Pismo Beach; and Norris said they got reports that she might be armed and having a mental health crisis.

Pismo Beach Police, State Parks, and the Highway Patrol all assisted the Sheriff’s Department with pursuit of the suspect vehicle, “as she evaded across jurisdictions,” Norris said. About 7:05 p.m., the woman “came home to the 200 Block of Santos Way in Pismo Beach and entered through the garage.”

That’s when specialized teams of law enforcement got involved. “Deputies formed a perimeter and made PA announcements,” Norris said, attempting to have her come out peacefully.

The Sheriff’s Office Crisis Negotiation Team responded, Norris said, and attempted to contact the suspect by phone and the PA system. They decided to bring in drones and eventually go in after her.

Willow Osah Waddell, 49 of Pismo Beach, was booked into County Jail on suspicion of Child Endangerment and Assault with a Deadly Weapon and bail was set at $250,000.