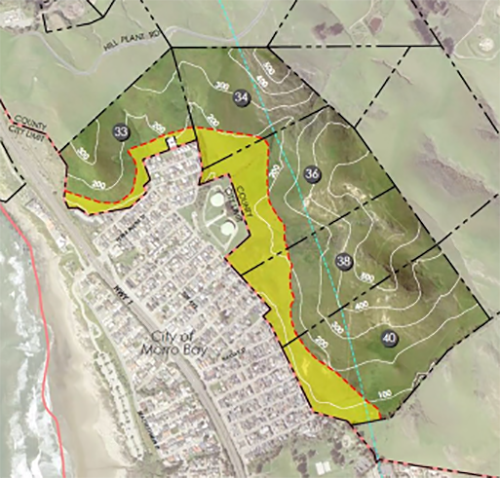 The City of Morro Bay’s sphere of influence will include Panorama Drive.

A countywide agency has voted to approve the City of Morro Bay’s request to expand its “sphere of influence” to include a row of lots on Panorama Drive, despite an avalanche of opposition due to landslide concerns.

The Local Agency Formation Commission (LAFCo.) voted 5-1 Jan. 20 to approve the City’s SOI request and take a first step in the direction of a future annexation into the City Limits and potential residential development of the 5 lots that total a little over 212 acres.

The “Panorama Lots” are outside the City Limits and in SLO County jurisdiction. The lots are part of Chevron Corp.’s Estero Marine Terminal property (over 3,000 total acres) and the oil giant had asked the City to bring them into the SOI to increase their resale value.

The change is part of a much bigger conservation effort spelled out in a memorandum of understanding that has already seen the purchase and preservation of the Chevron Dog Beach under the City’s ownership, plus a large parcel at Hwy 1 and Toro Creek Road is now part of the County Parks’ purview. The Cayucos Sanitary District played a large part in those land acquisitions.

The MOU also points toward a future conservation project intending to also preserve a large canyon area east of Del Mar Park that is being negotiated now.

For the City, the Panorama Lots are part of an effort to delineate the city’s eastern edge with open space up to the hilltops, and to have control over how and when they are developed.

But residents of North Morro Bay have come out strongly against anything happening on that hillside, owing mainly to the fact that it is geologically unstable and has moved in the past during really wet winters. The hillside also shows signs of soil creep — the gradual movement downhill of soil most easily recognized by fence posts and utility poles leaning downhill.

The hillside above Panorama Drive moved and damaged homes below in 1983, 1995 and 2005, and during rainstorms can experience mudflows that can cover streets.

In 1995, a movement cracked the Whale Rock Pipeline, which runs parallel to Panorama Drive, and led to the Whale Rock Commission rerouting it down to Tide Avenue to avoid the unstable areas.

Citizens’ concerns are that grading and development would destabilize the hillsides and put their properties and very lives into potential jeopardy. The opponents have been busy, garnering over 900 signatures on a petition opposing the SOI change; sending in over 200 public comment emails to LAFCO., before the meeting; and, five of the six public speakers at the Zoom meeting were against it.

LAFCo., took into account all of these concerns but dismissed them as not being under consideration with this SOI application. But the concerns would be addressed if and when the City comes back to LAFCo., with a proposal to annex the lots.

Morro Bay Community Development Director, Scot Graham, told LAFCo., that the intentions are to possibly, some day, annex the lots. He reassured residents that a full geological analysis of the instability issue would have to be done before anything could be built on any of the lots.

He also said the City would not allow anything to be built above the 200-foot elevation line, which Graham said means allowing one single family residence, plus one granny unit, per parcel. State law allows granny units — secondary dwelling units — to be built in all zoning districts, but City codes, policies and ordinances can dictate where development can be situated on the lots.

Ironically, leaving the lots in County jurisdiction triggers the County zoning requirements, and as the lots are currently zoned agriculture, development could include homes, barns and other farm structures. So having the City take control over the Panorama Lots limits development more than the County.

However, the County, faced with a similar issue in Cayucos and the infamous Cayucos “paper lots” located above Chaney Avenue, has declared them too steep and too unstable to build on.

The County has denied development proposals repeatedly and has been buying up and retiring the paper lots through tax lien sales.