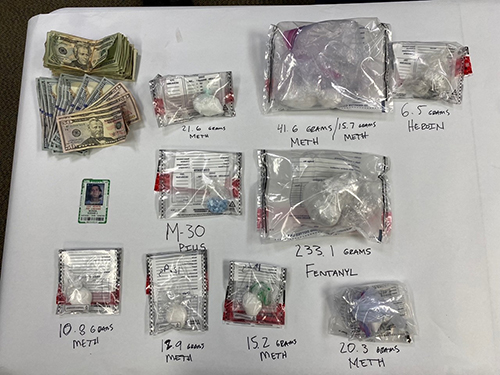 Photo shows the suspected drugs and cash seized by Sheriff’s detectives from a man in Paso Robles who was on probation for a 2019 conviction for dealing drugs.

The arrest of a probationer on drug possession charges took thousands of dollars worth of dangerous drugs off the street, but the alleged dealer didn’t stay in jail for long.

Sheriff’s spokesman Tony Cipolla said in a news release that on May 17, “Detectives with the Sheriff’s Special Operations Narcotics Unit, Gang Task Force and Probation Department made contact with the driver of a vehicle which had just pulled into the parking lot of a shopping center in the 100 block of Niblick Rd.  [Paso Robles]. The driver, identified as 40-year-old Edgar Monge, was known to be in violation of his probation.”

Monge, who Cipolla said has no known address, had been on “Post Release Community Supervision” (probation), for a 2019 conviction for sales of a controlled substance, according to Cipolla. Under the law, such probationers are subject to search anytime and anywhere by police and when they searched his car, they found a cache of suspected drugs and money.

“During the search of Monge’s vehicle,” Cipolla said, “Detectives discovered a backpack in the back seat of the car, which contained a large amount of methamphetamine. Detectives discovered a hidden compartment between the back seat and the frame of the car. Inside that compartment they found a locked pouch, which contained a large amount of fentanyl.”

They also found a bunch of fake pills. “Investigators also found counterfeit Oxycodone M-30 pills,” Cipolla said, “as well as heroin and drug paraphernalia indicating the sale of narcotics. The estimated worth of the narcotics is approximately $11,000.” He also had some $2,000 in cash, Cipolla added.

Cipolla said, Monge posted bail on the probation violation, and “was released on his fresh narcotic charges pursuant to the Statewide Emergency Bail Schedule.”