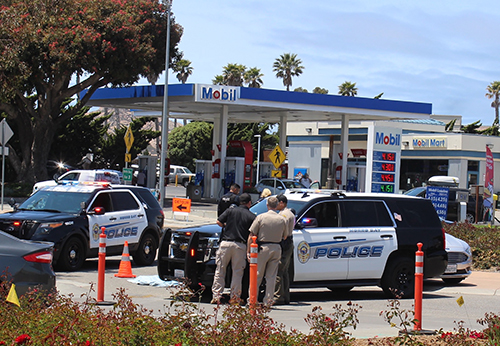 Police and a coroner’s office investigator are at the scene of a July 15 pedestrian vs. garbage truck where a homeless man, Mark Evans, 69, came to rest at the Morro Bay Boulevard Roundabout.

A homeless man who was hit by a garbage truck and dragged to his death at Morro Bay’s Roundabout, had just arrived in California the day before, after an extended stay in Hawaii, the Estero Bay News has learned.

The tragic case happened about 12:10 p.m. Thursday, July 15 when a Mission County Disposal garbage truck hit the victim, identified by police as Mark Richard Evans, 69, at the intersection of Bernardo Avenue and Morro Bay Boulevard as he was crossing the street.

Evans is believed to have been hung up on the truck’s bumper or undercarriage and was dragged about two blocks to the Roundabout, where he became dislodged from the truck and came to rest on the sidewalk at the entrance to the Sinclair Gas Station. He died on the scene.

Reports from the public on the Internet gossip site, Morro Bay Next Door, indicated that a woman laid a blanket over Evans’ body. Traffic was heavy at the time and when police got to the scene and closed off streets, it quickly backed up in all directions. Dozens of people witnessed the scene.

MBPD Cmdr. Amy Watkins said in a news release that the driver of the truck “was contacted and is cooperating with the investigation. Drugs, alcohol, and/or speed are not believed to be a factor in this collision.”

Evans had only been in California for a day, after spending about 19 months in Hawaii.

Matt Velzy, a native Californian who lives in Hawaii, told EBN that he and Evans grew up together in El Segundo, Calif., and went to high school together. He had been living with Velzy and his family in Maui, Hawaii for the past 19 months, helping out with the care of a member of Velzy’s family.
Police said Evans was from Twain Harte, and Velzy said he did live up in the Northern California Sierra Foothills for a while and might have had a post office box there, “but basically, he was homeless.”

Velzy said he felt terrible because he had given Evans money for a plane ticket back to the mainland and he’d flown back shortly before his death.
Evans caught the red eye flight July 13, Velzy said. He was supposed to be taking the train north to Sonoma in Northern California, to take care of some business and then planned to settle on the Coast. But, “He made it one day,” Velzy said with great sadness.

As for why Evans didn’t see or hear the trash truck coming and avoid it, Velzy explained that some years ago, Evans was mugged and suffered an injury that affected his eyesight.

“He had bad eyesight,” Velzy said, “and was forced to look down at his feet when he walked, so he wouldn’t trip over anything.”
He noted that Evans has a sister who had phoned him after learning of her brother’s death. Velzy is cousins with a Morro Bay resident, who put him in contact with EBN.

MBPD is still investigating the accident and anyone with information is asked to call Ofc. Kevin McCool at 805-772-6225.