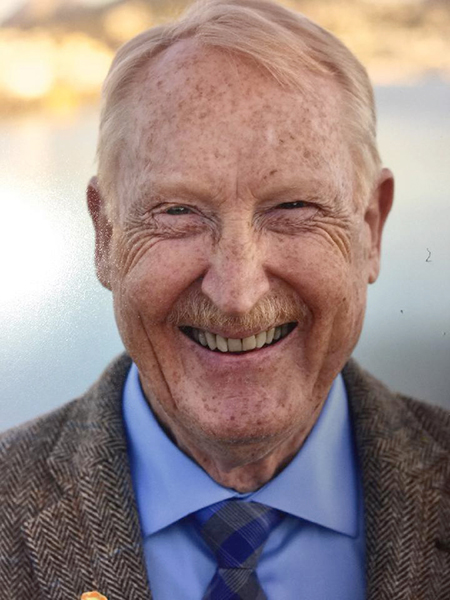 Councilmember Robert “Red” Davis passed away peacefully on Saturday, July 24 at his residence. Red is survived by his loving wife Gail Davis, and their daughter Catherine Sullivan, son-in-law Pat, and granddaughters Caitlyn and Sara. He was 76-years-old.

Red Davis began his service as Councilmember in 2017, and won a second four-year term in November 2020. Councilmember Davis was instrumental, along with his Council colleagues, in moving forward the Water Reclamation Facility, improving the city’s financial condition, and enhancing communication with the community.

Prior to being elected to the Council, Red Davis served on a variety of city ad hoc committees, including the General Plan Advisory Committee, and volunteered for numerous community organizations including the Morro Bay Chamber of Commerce, Friends of the Morro Bay Library and Bike SLO County. Red retired from CalTrans in 1996 as a project manager, after 33 years of service, and proudly served his country in the U.S. Air Force from 1965 to 1998, retiring as Senior Master Sergeant.

“On behalf of the City Council, I want to offer my heartfelt condolences to Gail, Catherine and her husband and their children, and to Red’s many friends in Morro Bay and beyond,” said Mayor John Headding. “Red Davis was a wonderful leader and friend to so many. He was a servant leader who worked tirelessly to advance and improve the quality of life of our community as a whole. Red’s strong work ethic, clear and concise communication style, and genuine care for our community members enabled him to make a huge impact on important city initiatives. Those included the WRF project, Embarcadero improvements, advancement of offshore wind energy, stabilization of city finances and the realization of several economic development projects. Red was truly one of a kind, and we are going to miss him greatly.”

The city, along with Councilmember Davis’ family, will host a public celebration of Red’s life within the next couple weeks, most likely at the Morro Bay Community Center. Event details will be posted to the city website once they are finalized.

“We are grateful to have known and worked for Councilmember Davis as city staff,” said City Manager Scott Collins. “I greatly appreciated his curiosity about how things worked and his kindness. He loved his job and connected so well with the community and city employees. We wish love to his family and friends during this tough time. We hope members of the community will join us in honoring Red’s life and service.”

← Previous: Former Coach, Teacher Sentenced to Jail for Tryst with Student Man Hit-Killed by Garbage Truck Had Only Just Arrived in California →