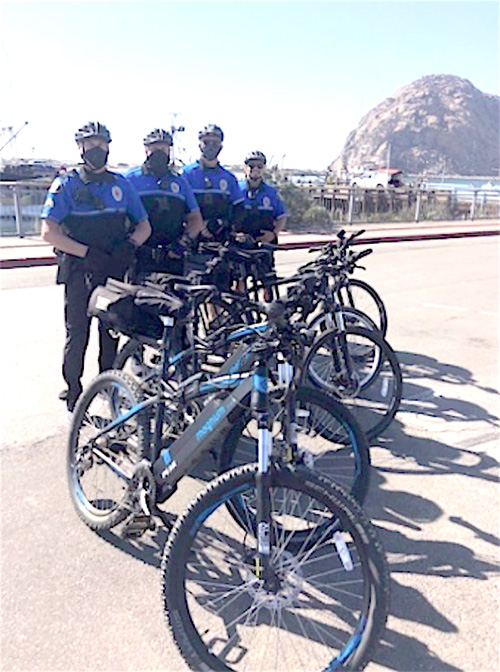 There will be more cops pedaling around town after the Morro Bay Police Department has added to its fleet of 2-wheeled patrol vehicles.

MBPD announced it has purchased two, new-fangled “E-bikes” to bring its fleet of bicycle patrol vehicles to four and beef up its Bike Patrol Team. “Electric bicycles or ‘e-bikes,’” reads a notice in the City Manager’s November 2020 Update newsletter, “allow officers to utilize bicycles to engage with the community while maintaining the ability to respond to emergency calls within the city without experiencing extreme fatigue officers experience riding standard bikes.”

E-bikes, or electric-assist bikes, which are quickly gaining popularity with rental outfits popping up in town, have an electric motor drive that assists riders on hilly streets and can increase speeds.

With all the hills in Morro Bay, an e-bike is probably a good thing for police bike patrols. “This creates a larger area of patrol coverage and more community engagement,” the report said. “The community will be seeing much more patrol bike details in the near future.”

The e-bikes are not the department’s first foray into electric vehicles. They have had two, electric motorcycles on patrol for several years.

Pictured here are the MBPD Bike Patrol Team and their patrol bikes.
And in other MBPD news, the department’s anticipated “Neighborhood Cop Program” got started in October.
The program divides the city into zones and assigns a police officer to each zone, to become a familiar and trusted face to the neighborhood with officers reaching out to the residents in their zone making introductions and getting familiar with the people under their watch.
“

The Police department has utilized department social media, news media, and informational mailers to advertise the new community program and mobile app, and officers are hard at work reaching out to the residents in their sectors to introduce themselves.”

The program is aimed at specific types of nagging issues. “Projects related to noise complaints, parking problems, and other quality of life concerns have been identified and officers are working closely with residents to address the issues.”