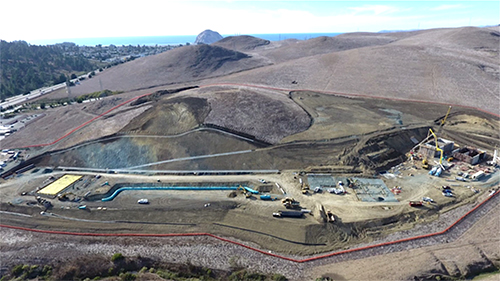 This bird’s-eye photo taken by a drone shows the Morro Bay Water Reclamation Facility construction site and the huge amount of fill dirt — some 20 feet deep — that has been bulldozed from the hillside and spread out over the plant site, with nearly 20-feet more remaining to be graded onto the site. Photo courtesy City of Morro Bay

The Morro Bay City Council approved another slug of change orders for its Water Reclamation Facility sewer treatment plant, pushing the WRF over the $75 million mark.

On Nov. 17, at an unusual special Thursday meeting, the Council voted to approve a dozen change orders for some $835,000 that included the bill for a massive landslide at the WRF construction site last May.
It’s the fourth set of so-called “project change orders” or PCOs on the WRF portion of the project and pushed the treatment plant job to over $75.7 million.

The original contract with Filanc/Black & Veatch, with a “guaranteed maximum price,” was $67.2 million.
But before construction started last March, the costs had already risen by over $1M due mainly to project delays caused when federal agencies clashed in Summer 2019 over the environmental impact report’s handling of habitat loss for the protected red-legged frog. The WRF site sits in the midst of critical frog habitat.
Three previous sets of PCOs raised the costs $1.6M, $63,000, and $5.99M respectively. But residents and businesses shouldn’t worry.

City Manager, Scott Collins told Estero Bay News, “The cost is covered by contingency for the facility component of the project and won’t impact water and sewer rates.”

The two biggest PCOs involved bureaucracy and Mother Nature. A PCO for $254,000 was attributed to delays in getting a permit from the State Department of Fish & Wildlife. The City worked with DFW regarding an “erosional feature” on the site and it wasn’t until this past June that DFW came up with a streambed alteration permit.

A City report said, “The DB [Design-Build] team was prevented from accessing the erosional feature area of the site for several months. Through close coordination with the City and WRF Program Manager, significant changes to the construction sequencing was made resulting in additional work (i.e., second handling of material, etc.).”

The City in essence was able to cut the PCO down from an estimate of over $1M.

The bill for a May landslide on the site has finally come due, as well. The slip, initially estimated at costing $350,000, was negotiated down to $280,000. The City got hit with the bill because its geologic consultant Earth Systems failed to discover and warn of the landslide, which it was determined was an ancient slip that started moving again after the grading work undercut the hill.
“After two separate geotechnical analyses,” reads the City’s report, “it was determined that the soil slip likely occurred due to the presence of an ancient land slide and is being categorized as a pre-existing condition.”

But even if the contractor knew about the ancient landslide in advance, the same thing would have had to be done with the materials, essentially spreading it out as part of the 40-feet of fill that will go on the site.

The third largest PCO, at $108,000 was for “standardizing equipment [controls in this case] across the WRF.”
Other PCOs varied in cost and scope and importance. For example, PCO No. 75 was for $11,709 to add a window. “In line with other City facilities including City Hall and Public Works, a security window is being added at the Administration Building to improve staff safety.”

In another rather odd PCO, electric car charging receptacles were added at a cost of $42,000. “Electrical receptacles were not specifically noted in the RFP and are necessary at the parking canopies to accommodate battery chargers, etc. for City vehicles,” reads the explanation for the change order.

Though the WRF’s costs continue to climb, including the recent awarding of a contract for the conveyance system that was $7M above the engineer’s estimate, those extra costs too are not expected to lead to rate changes.

“There may be a few other change orders left,” Collins said, “but we expect those to be minor. Most of the work where you’d run into needed changes [design, ground work, equipment purchases] is complete for the facility.”

The latest PCOs reduced the contingency for the WRF from $1.44M to $614,000. But thanks to the low interest rate, 0.83%, the City got for its federal loan, “This increase in the GMP [guaranteed maximum price] does not affect user rates due to the historically low interest rate received on the EPA WIFIA loan.”

So the current water/sewer rates of $191 a month for an average residential customer including a $41 a month WRF surcharge — are still holding, but the conveyance system hasn’t yet turned a shovel full of dirt.

And with the trenching slated to go right through known Native American archaeological sites, PCOs, cost increases and delays could be significant.

← Previous: Grants-in-Aid Applications in SLO Being Accepted MBPD Gets E-bikes →