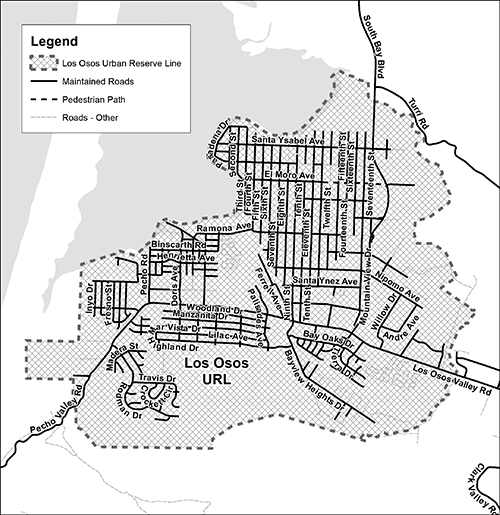 A proposed ordinance could prevent unhoused people from setting up camp in specified areas of the county including Palisades Avenue in Los Osos.
A no-camping ordinance was introduced at the San Luis Obispo County Board of Supervisors (BOS) meeting on Sept. 14. It would prohibit overnight parking throughout much of the towns of Los Osos, Avila Beach, Cayucos, Cambria and Oceano.

Part of Palisades Avenue has been an area of contention for more than a year. In March of 2020, the library parking lot became a county-sanctioned safe parking site with bathrooms, security and on-site staffing. That program ended on June 30 of that year.

A park, the South Bay Community Center and St. Elizabeth Ann Seton church are also on the street that is often lined with people living in vehicles. Some days there are up to 30 cars, trailers and RVs parked on the street with small tents and sometimes large amounts of belongs interspersed.

The ordinance would allow the California Highway Patrol and the County Sheriff’s Department to tow vehicles that are in violation. Currently, the area has 72-hour rule preventing vehicles from being in the same spot for more than three days. That said, cars can be moved a short distance and the enforcement time begins again.

“The no camping ordinance will provide a much stronger enforcement tool for requiring parkers/campers to vacate Palisades than the 72-hour parking limitation we currently have,” District 2 Supervisor Bruce Gibson said on social media.

Seven people spoke in support of the new ordinance during the BOS meeting. Some cited incidents of mental health breakdowns, threats to people utilizing the park, drug activity and vandalism.

“I wholeheartedly support this ordinance and its strict enforcement for our town, and that’s going to be key, strict enforcement,” said Los Osos resident Becky McFarland, who started a petition not long ago to make El Chorro Regional Campground a safe parking area. “As you have been hearing from concerned citizens for the past 18 months, the lack of this ordinance and the County’s setting up a safe parking site in our small, small library parking lot, has caused the heart of our small town, to become a lawless unsafe area.”

“The situation on Palisades is bad for everyone that’s why I’d like to voice my strong support for establishing an anti-camping ordinance in Los Osos and empowering our sheriff’s deputies to enforce it,” he said. “Like many of my Los Osos neighbors I’m committed to helping others in my community, but we’re not helping anyone by enabling them to live in our public space while they decline the professional assistance that they need.”
No one spoke against the anti-camping ordinance.

“The establishment of these no camping ordinances are only steps along the way,” said Gibson during the meeting. “Quite clearly this board and [our] communities and our agencies have a lot of work to do. And I just want colleagues and the public to know that I’m wholeheartedly committed to continuing progress on this, and we will try to make it happen as soon as possible.”

Although homeless people living in the area isn’t new, the County become more actively involved in October of 2020 when multiple reports were made of human waste, syringes, public safety issues, and possible fire threats in the space adjacent to the library in what is known as Midtown on county property.

At that time County officials began efforts to relocate an estimated dozen unhoused community members in the so-called Midtown Los Osos Encampment Clean-Up Project. Those efforts and the resulting $10,000 funding was subsequently approved by the BOS.

There are legal complexities that come with people setting up camp on public property. In 2019, the U.S. Supreme Court backed a lower court’s ruling (Martin v. Boise) in Boise, Idaho that homeless persons cannot be punished for sleeping outside on public property in the absence of adequate alternatives.

“We welcome an ordinance that would give us an opportunity to enforce no overnight camping on the streets of the city of Los Osos,” Comdr. Stuart MacDonald with the local Sheriff’s Substation told the BOS. “I also wanted to issue caution that those are the kinds of ordinances that Martin versus Boise intend to block enforcement of unless we have the corresponding space available for people in that circumstance to go to. These things really need to be done in a coordinated way, in a holistic [way], because if there is no space available at the end of October, when this ordinance may become operational, then enforcement is not possible under case law decision.”

Last month a new safe parking area was set up at a location on Kansas Ave. near Highway 1 in in San Luis Obispo. It can accommodate a wide variety of vehicles including cars, vans, trucks, and RVs. It is equipped with ADA-accessible showers, restrooms, a hand wash station, and dumpsters for participants’ use.

At that time, County staff and contracted service providers began reaching out to those parked on Palisades to let them know that in the near future long-term parking will no longer be allowed.

The 5Cities Homeless Coalition and CAPSLO coordinated with the County to provide outreach services and offer case management and links to supportive services to address individual needs of those people staying at the Kansas Ave. site.

The site has an initial operating period of three months but county officials told Estero Bay News that the timeframe would be extended, security would be increased and plans are in the works to expand that area to accommodate the growing need as well as install some all-weather upgrades.

“This has been good because we’ve been able to test the proof of concept of it,” said Rebecca Campbell, assistant county administrative officer. “Folks are using the site and we have the amenities set up. We’re looking at a possible expansion of the site . . . We’re taking it three months at a time, and we’re looking at extending it for another three months. When we first started it, we weren’t sure folks were going to use it. Now that folks are using it we’re like, ‘okay, we need to extend this.’ We’re starting with that approach, and then we’ll go from there and make sure we can find a sustainable funding source.”

The no-camping ordinance is expected to be adopted at the Sept. 28 Board of Supervisors meeting. Following that, it would be 30 days before it would go into effect.

As of Sept. 17 limited enforcement started on Palisades. Gibson posted that the Sheriff’s Office and CHP began issue notices and towed at least one vehicle.