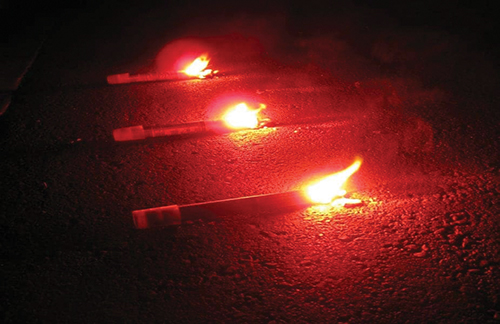 Morro Bay Police are investigating the circumstances surrounding a fatal motorcycle accident that happened on a tricky stretch of Atascadero Road (Hwy 41).

According to a news release, at 1:45 p.m. Nov. 28, police responded to a crash in the 500 block of Atascadero Rd., at the entrance to the Miner’s Ace Hardware shopping center.

A motorcycle, operated by Michael Barrios, 69, traveling east bound on Atascadero Road, collided with a truck, operated by Efren Morales, 51, while Morales exited the driveway from the businesses in the 500 block of Atascadero Rd., the news release said.

Both men stayed on scene as police and firefighters arrived. Barrios, “complained of pain and was transported to a local area hospital for treatment,” the MBPD said. “Barrios was admitted to the hospital where he underwent surgery and continued treatment in the ICU.

“On Wednesday, Nov. 30, Barrios died as a result of his injuries.” Morales was apparently not seriously injured.

The police said that alcohol and drugs “were not a factor in the collision.”

That entrance/exit to a major shopping hub in town has long been tricky, as drivers going west on the highway into town are often traveling very fast, and drivers going east are picking up speed as they head out of town.

In the late afternoon, the sinking sun can greatly complicate navigating the intersection as the glare can be almost blinding. But at 1:45 p.m. with the sun high in the sky, it wouldn’t have been a factor in this crash.

The City and SLO Council of Governments have for years been working on a plan to build a roundabout at the intersection of Atascadero Road and Main Street to alleviate traffic at that busy intersection.

How that will affect the traffic flow down the street at Miner’s and at three mobile home parks and condominiums all in the immediate area, is something officials will have to account for. Also, a 35-unit apartment complex is being built at Atascadero Road and Sunset Avenue.

With the current 4-way stop at Main, some motorists hesitate to go, which creates gaps in the traffic down the street for ingress and egress from the shopping center.

MBPD is asking for the public’s help with the accident investigation. If readers have information about the crash, call 805-772-6225.