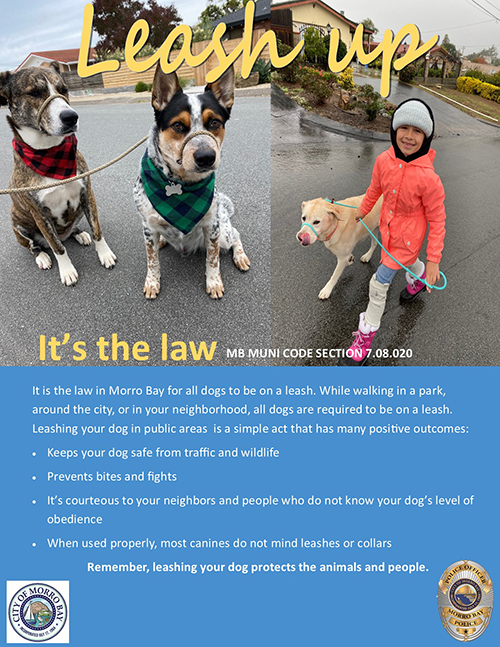 MBPD Cmdr. Amy Watkins, in a news release issued Monday, Jan. 3, said the “Leash Up” campaign would last a month. “The campaign will run for 30 days and will include officers making contact with people in parks and around the city to remind them to leash up their dogs if they are seen without leashes,” Cmdr. Watkins said. “Also, our P.D. message boards have been placed at our two larger parks, Del Mar and Cloisters, to help remind people to leash up their dogs.”

The City and the police “receive complaints on a regular basis regarding unleashed pets in the city,” she said, adding that the Leash Up campaign is being done to draw attention to this problem.

While their first action won’t be issuing tickets for the unleashed, they have that option. “During the campaign,” Cmdr. Watkins said, “officers will make contacts with unleashed-dog owners and will also write citations if needed. Our goal is to educate first and seek compliance prior to issuing any citations.”

Local leash laws vary depending on location and jurisdictions.

In the City of Morro Bay, dogs are required to be on leash — on city streets, the Embarcadero, public parks and even the City’s Beach (Morro Strand from Morro Rock to Morro Creek).

Dogs however are entirely prohibited on State Parks’ beach — from Morro Creek to North Point — and enforced by state park rangers.

The City will not enforce the leash law at the Chevron Dog Beach, Cmdr. Watkins clarified to Estero Bay News, which was obtained last year and the City has pledged to remain an off-leash beach.

And Morro Strand from the end of Studio Drive (in Cayucos) to the Cayucos Pier, while owned by the State Parks Department, is leased and under SLO County’s jurisdiction. Dogs on leash are allowed there, with the County Sheriff’s Department doing enforcement.

The Giannini Family off-leash dog park located inside Del Mar Park will also remain an off leash area, though the larger park — as well the path to the dog park — falls under the leash law.

Cmdr. Watkins said, “Dog Beach is considered an off-leash dog area similar to Del Mar dog park, so no, the law does not apply to specified ‘off-leash’ areas.” Under the City’s Municipal Code, Section 7.08.020, the fine for a leash law violation is $62.

In a poster for the campaign, police said, “It is the law in Morro Bay for all dogs to be on a leash. While walking in a park, around the city, or in your neighborhood, all dogs are required to be on a leash. Leashing your dog in public areas is a simple act that has many positive outcomes:

• Keeps your dog safe from traffic and wildlife;

• It’s courteous to your neighbors and people who do not know your dog’s level of obedience;

• When used properly, most canines do not mind leashes or collars.”

And a final piece of advice: “Remember, leashing your dog protects the animals and people.”