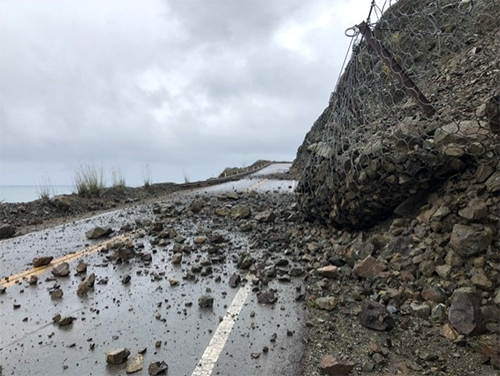 The unstable hillsides above Hwy 1continue to cause major headaches for Caltrans, which has closed and reopened stretches of the scenic highway at least three times since last November, in order to clear away mud, rocks and debris that’s come down in recent storms.

Papich Const.,of Arroyo Grande was awarded a $1.3 million emergency contract (no bids were taken) to remove fallen rocks and repairs to the rock fall system at Cow Cliffs (Post Marker 28.2). They were also going to remove rocks and debris from the site of “Paul’s Slide” a massive landslide that came down in early 2017, as well as debris removals at Caltrans’ Willow Springs Maintenance Depot.

The Big Sur Coast got over 12-inches of rain in a 24-hour period, including recent wildfire burn scars. A big storm in January 2021 also caused a lot of landslide activity, which the recent storms exacerbated.

On Dec. 23, Caltrans reopened this stretch of Hwy 1, after Papich did extensive removal of debris and rocks but it didn’t stay open for long, as on Christmas Day Santa left motorists a surprise gift — another massive landslide, this time entirely within SLO County.

In a Dec. 18 news release, Drabinski said, “Highway 1 remains closed due to rock fall and debris in the roadway in Northern San Luis Obispo County from just south of Ragged Point to the Elephant Seal Vista Point.”

The slide was actually located at a place called Polar Star (PM 71.8), which is about 2-miles south of Ragged Point.” Drabinski told EBN that the “Polar Star” landslide is between Ragged Point and San Carpoforo Creek, as apparently the Elephant Seal Rookery is a convenient place for a turn around.

This cleanup job went to Souza Const., of SLO with a $1.25 million contract to “clear the slide, remove the unsupported rock above the roadway, and perform other related repairs.” That rock removal included blasting at rocks still in the hillside undercut by the previous slide and in danger of coming down as well.

In a photo released by Caltrans of the slide at Polar Star, it appears about 75 feet of the hillside turned to mud and came down onto the roadway. In other photos, huge boulders and massive amounts of rocks are shown blocking the roadway from the first closure area.

With a couple of weeks of relatively good weather, Caltrans’ contractors were expected to make great progress on removing loose debris and rocks and shoring up the hillsides, however, the winter isn’t over and so one can expect numerous other slides and road closures in the coming weeks and months.

Barricades, cones, as well as message and directional signs are in place at both ends of the closures to alert motorists traveling in the area.

For traffic updates on other state highways in Monterey and San Luis Obispo Counties, contact Caltrans District 5 Public Affairs Office at (805) 549-3318 or see the District 5 website at: https://dot.ca.gov/caltrans-near-me/district-5.