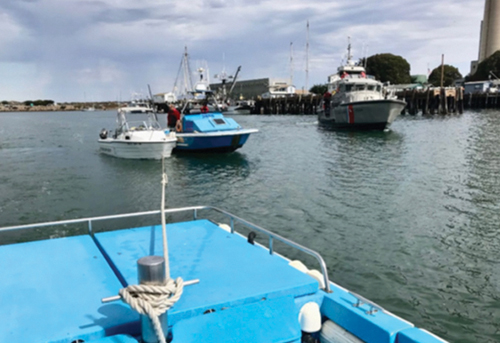 A cooperative search and rescue mission in August led to the saving of three people off a sinking boat off Montaña de Oro State Park, and the rescue of a woman who fell on the rocks and bloodied her face.

According to a report in the City Manager’s September Newsletter, on Aug. 17 the Harbor Patrol and Coast Guard received a distress call over marine radio of a vessel with three people on board taking on water south of the harbor entrance off Montaña de Oro.

A passing fishing boat, the Renegade, was first on scene and pulled the people off the boat, a 21-foot Bayliner, and out of the water.

When Harbor Patrol and Coast Guard arrived, “the vessel’s stern was completely submerged, leaving only the cabin and about a foot of bow above water.”

Harbor Patrol connected a line to the boat’s trailer eye and took it in tow. Towing the boat on a “half-plane” brought it up out of the water and the sea began draining out through the scuppers.

The Coast Guard took the passengers, who were unharmed in the incident, off the Renegade and as the towed boat entered the harbor a second patrol boat came alongside to continue dewatering.

A Coast Guard crewman climbed aboard to assist, that’s when it was discovered that the boat had not sprung a leak at all but had “taken a wave over the stern [rear], causing the deck scuppers to drop below the waterline, and thus began sinking.”

A scupper is an opening in the sidewall of a boat that allows water to drain out instead of pooling inside the boat.

All aboard the Bayliner were rescued without injury. It wasn’t so nice for a woman who took a rumble on the rocks outside the Harbor Office.

According to another entry in the newsletter, on Aug. 19, a woman came to the office for some gauze for her mother, “who had fallen nearby. Patrol proceeded to the victim on the embankment in front of the Coast Guard building and about to tumble down toward the water.”

The fire department soon arrived and took over care of the poor woman, who had “substantial blood coming from her face,” according to the report. She was taken to Sierra Vista Hospital via ambulance for treatment.

Readers are reminded to be careful around the water’s edge and especially when climbing on or around the rock revetments, which are not secured in place and subject to moving.