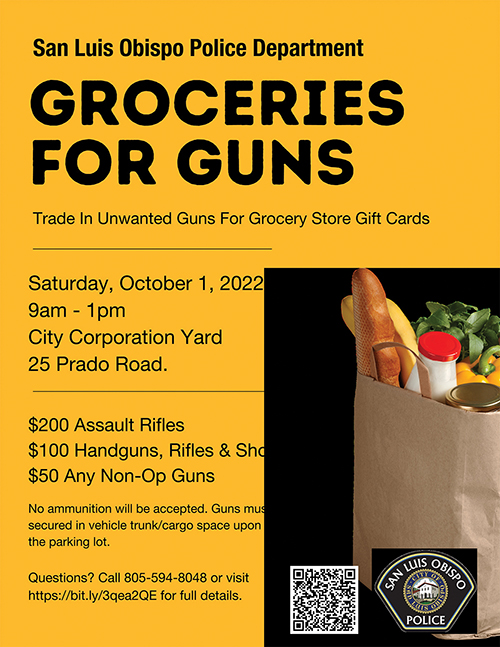 Unwanted guns can help put food on the table.

The San Luis Obispo Police Department is hosting its first gun buyback event, “Groceries For Guns,” on Saturday, October 1, from 9 a.m. to 1 p.m. They say the goal is to reduce firearms in the community, which helps reduce the risk of gun violence, accidental discharges, domestic violence, gun theft, and suicide.

Although the SLO P.D. puts on the program, people throughout the county can participate — it is anonymous.

“Our target goal is the city but the county is welcome,” SLO P.D. Captain Fred Mickel told Estero Bay News. “The whole idea is to get unwanted guns out of the hands of the people that don’t want them. We give them an avenue to safely have somewhere to take those guns.”

Some of those unwanted guns may have been inherited or left behind by a former roommate thereby leaving it in the possession of a person that doesn’t have the means to safely store it.

“We’re not trying to take guns out of legal gun owner’s hands,” Mickel said. “We are curbing gun violence — you don’t have a gun that’s now in a position to be stolen or used by maybe a juvenile or someone else that should not have had it in their hands in the first place. That’s really the target.”

Mickel said that since this is the first buyback the department has done, he is not sure how many people will participate.

“If it’s just one [gun] that is not used in a crime in the future, it’s worth every penny,” he said.

ID will not be required, and no questions will be asked. Only guns will be accepted, no ammunition. Gift cards purchased at a variety of grocery stores in SLO will be offered for each gun turned in (three maximum per person).

“We’re trying to keep our money local,” Mickel said. “We were able to do gift cards through all our local grocery stores. It’s helping keep the money in the community. It is coming out of the city’s budget to fund this. We can help our local businesses that way, which is also one of the one of the big pushes.”

All guns must be secured in the truck/cargo space prior to arrival at the Corporation Yard. Participants must remain in their vehicles unless otherwise instructed by a SLOPD staff member. Do not handle any firearms yourself. An officer will remove the firearms from your vehicle.

“If you don’t know what you’re doing, guns can be dangerous,” Mikel said. “We don’t want to have any accidents happen. I’m going to have my range masters be the ones that are handling the firearms, making sure they’re empty and safe, and then bringing them over. It’s just is the safest way to do it.”

Information You Will be Asked:

1. The number of firearms in your vehicle.

2. The location of the firearm(s) within your Vehicle.

3. Confirmation that the firearms are not loaded. If you are turning in a firearm that you are unsure if it is loaded, be prepared to inform the officers of this information.

Advise the officer if you have any other items in you vehicle that could be considered hazardous such as ammunition, gun powder, military ordnance items, or fireworks. If those items are present, the officer alone will handle and control these items for everyone’s safety.

Participants will not be asked any questions by assisting police personnel. Personal information regarding the firearm’s origin, if voluntarily offered, will be kept confidential.

Legally, anyone who owns a gun must have it properly secured in a safe.

“If you are going to have guns in the home, please, properly secure them. If not, then feel free to bring them out on October 1,” Mickel said.

Readers with additional questions, should reach out to Captain Fred Mickel at fmickel@slocity.org or 805-594-8048.